"Despite increased working from home, the office remains the linchpin of a service company"

Before Corona, office and corporate fruit enjoyed a nice increase in demand. Leading delivery service Obstbaron has also clearly benefited from this steady growth trend. Due to the crisis and subsequent adversities, the company, which now operates nationwide, had to reinvent itself. In an interview at the Hamburg location, co-founder and managing director Justus Stieler looks back as well as forward. 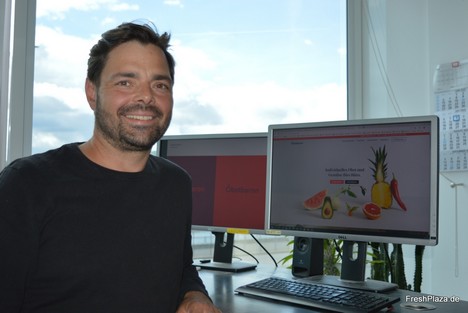 The fruit company was founded ten years ago in Munich, and in 2012 the ambitious founders opened a second location at the Hamburg wholesale market. In the years that followed, there was a steady expansion thanks to a contemporary franchise structure with locations opening in Essen, Düsseldorf and Cologne, among others. The figures are impressive: 900 companies are regularly supplied by a total of around 100 employees. The approximate turnover of goods is therefore around 60 tons of fruit and vegetables per month.

However, Corona set the fruit baron back. Stieler: "We have had to adapt to the circumstances. We briefly tried our hand at supplying private buyers, but that wasn't such a good fit due to the completely different logistics and purchasing structures. After that, we threw ourselves fully into digitization by implementing a new, contemporary ordering process, among other things. It's done less manually and more centrally instead of in multiple places, which in turn reduces sources of error. Incidentally, the latter applies not only to the ordering process, but also to purchasing. In short, we have been able to realize an increase in efficiency with this, saving resources and capacity."

Difficult procurement situation
As is well known, the pandemic has led to increased working from home, which is clearly reflected in the purchase volume of individual orders, Stieler continues. On the procurement side, the fruit baron also faces the current adversities and extreme market fluctuations. "Regionality is obviously in vogue: as soon as domestic apples are picked, for example, we find it difficult to resort to apples from overseas because the customer simply won't accept this. German berries and plums are also in extremely high demand during the season."

When it comes to exotics and tropical fruits, the company also tries to source European goods as much as possible. "Spanish avocados are coming on strong and are also competitively priced compared to overseas produce. With European grapes, however, it's difficult to do justice to the idea of regionality, especially since the European grape season is relatively short."

In general, the procurement situation remains very tight, according to Stieler. "Procurement costs have doubled in some cases due to increased freight and logistics costs. Unfortunately, availability is also not consistent, which is reflected, among other things, in the fact that the desired calibers can almost be impossible to obtain for certain articles. For example, I haven't seen any AAA-grade Paraguayos for weeks. In day-to-day practice, market developments may mean that we have to adjust the composition of our fruit baskets accordingly."

Healthy eating still desired in the office
Despite the slump in volumes and the difficult market environment, Stieler is confident. "Given our investments in digitalization, I think we are particularly competitive. Especially in the urban centers, where we are not yet represented, such as Berlin, Hanover as well as Frankfurt, there is potential for possible new Obstbaron franchisees. Because despite the new reality and growth of the home office trend, I am convinced that the office will remain the linchpin of modern service companies. Healthy eating in the workplace is inevitably part of that, so the demand for fresh office fruit will again increase significantly."