Yesterday was held in Paris the launch of the campaign apple pear 2022. An annual meeting that brought together more than 120 players in the industry, and allowed operators (producers, marketers, wholesalers, restaurateurs, processors through distributors and the participation of the Interprofession) to meet to review the economic situation of the industry and present the summary of harvest forecasts 2022 in France and Europe, without forgetting the Vergers écoresponsables approach and finally the Communication Strategy and Media Plan 2022-2023.

Apples: downward revisions in France and in Europe; Gala particularly affected
If at the beginning of August the forecasts indicated 1,468,000 tons, a level quite close to the average and higher than the last two years, the persistent hot weather and the drought have affected the production potential. "The potential size was good at the beginning, we hoped for rain, but finally the water reserves were, for some producers, insufficient, which led to a change of scenario," according to Vincent Guerin, head of economic affairs of the ANPP.

1 million 468 thousand tons had been announced during the Prognosfruit "In recent days, the situation has led us to re-evaluate this harvest forecast. The French harvest could therefore be between 1 300 000 and 1 350 000 tons, or 4% less than the small harvest of last year. A re-evaluation that particularly affects the Gala "especially if we talk about marketable crop in fresh because the hot temperatures affect the coloring. There will therefore be a higher than usual proportion of Gala destined for processing and consequently a lower fresh market." 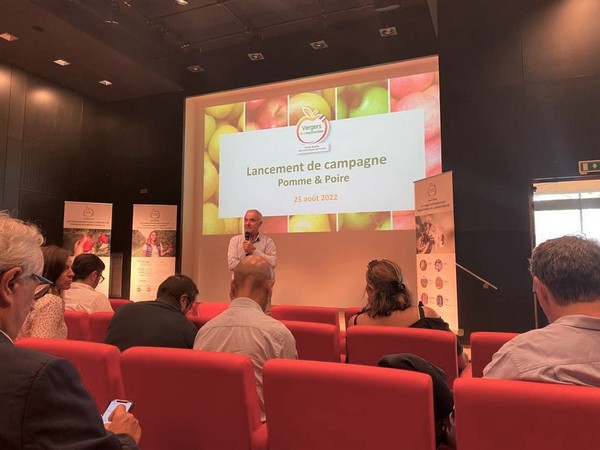 At the European level, the harvest initially forecast of 12 million 69 thousand tons a month ago will certainly be revised downwards by 10%. If the figures remain for the moment those announced at the beginning of August, some Italian operators announce up to - 30 % in Gala. Germany, the United Kingdom, Belgium and the Netherlands will also have to revise their initial forecasts downwards. The Italian harvest would finally show a 30% decrease, especially in Galas, and Poland, the first European producer, which announced a harvest of 4 million 500 thousand T would show up to -70%, producers, for lack of sufficient means, would have done without many actions in orchards.

Outside Europe, China expects to lose nearly 20% of the harvest, or 10 million tons less in the northern hemisphere with this fall in production due to frost.

Club apples, on the other hand, are still growing on almost all varieties, thanks to new plantings.

In conclusion, the European harvest forecasts initially similar to last year will be drastically revised downwards due to the drought in France and in Europe. An important industry proportion, especially in Poland, and therefore a lower supply on the fresh market. The supply of fresh Gala will be greatly affected by the weather conditions in many European countries. However, good taste quality with exceptional sugar levels should be noted. "The level of consumption is still uncertain but with more sizes than last year and a high sugar content, we can expect a recovery in the level of consumption of apples", concluded Vincent Guérin.

Pears: a level of harvest "better" compared to 2021
This year the pear harvest in France would amount to 137,000 tons, forecasts initially established at Prognosfruit. "We are on a level of harvest « that finds colors » compared to the huge deficit of last year when the production amounted to 56,000 tons," a level almost similar to N-2 and slightly higher than the average of 2015, a year of high production. A production in progression on the summer pears with notably the Williams, the Guyot being, it, rather close to the average. For the Conference, if the production judged at the beginning of August was close to the average, the current increase in size could lead to a downward revision. A good production is also expected for Comice and Angys.

A downward revision is certainly to be noted for the European production, Belgium and the Netherlands having also suffered from the drought and a lack of irrigation with the consequence of small sizes. Based on the figures initially announced at the beginning of August, European production would amount to 2 million 78 thousand tons, slightly below the 10-year average but higher than 2021.

We note a small production of pears in Spain due in particular to the spring frost in Catalonia. The Italian production is also recovering some colors compared to the huge deficit of 2021; however, the country is no longer at its potential 7 to 800,000 tons due to significant grubbing. After a strong harvest in 2021 for the Portuguese Rocha pear, this year's production would return to a more modest level, with 11% less than the average. Finally, for the Netherlands and Belgium, levels were expected to be close to the average but the figures should be revised downwards due to the drought.

Concerning production outside Europe, there is a strong deficit in China, the world's largest pear producer with -15%. In the United States, the harvest should be "normal" and Turkey has had an above-average harvest compared to last year. 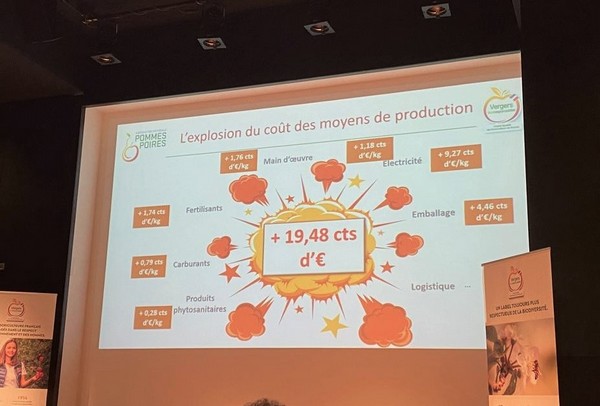 Multiple challenges for this new campaign
A succession of climatic hazards, an explosion in production costs, increased regulatory and societal pressure, increasingly strong national and international competition... For the past ten years, the sector has had to face a growing number of challenges.

"The 2022 campaign will be placed under the sign of inflation but it is not the only factor that weighs today on the sector. To have succeeded in producing apples and pears this year is a feat as the production conditions are exceptional", said yesterday Pierre Venteau, director of the ANPP before presenting in more detail these problems.

While producers suffered a historic frost in early April, rather "well anticipated and controlled" according to Pierre Venteau, thanks in particular to candles, wind towers or spraying, not to mention the hailstorms in June, with some structures damaged, it is the heat-drought cocktail that came as an additional blow to production. The second factor is a market for apples that is getting heavier and competition from Poland is becoming increasingly heavy.

"Consumption of fresh apples is falling, the latest figures show an 11% drop in household consumption at home. Added to a Polish competition that is taking hold: today it is more than 12,000 T over a year that comes in, for fresh as for the industry." Another effect that weighs on the market: smaller sizes. "There are more apples to sell but less tonnage."

On the explosion of production costs, which concerns both the orchard and the station: "If we take the time necessary for the orchards, we must count the non-road diesel which between 2020 and 2022 has doubled. For fertilizer, between 2020 and 2022 we are in a ratio of x3. Another mechanical factor linked to inflation and which concerns the workforce, are the 6 increases in the SMIC since January 2020, including 3 this year.

"At Vergers écoresponsables we use biological control but when there are large invasions of aphids we are obliged to intervene, and therefore the anti-scab has increased by 23% between 2020 and 2022, organic insecticides are 5% more and growth regulators by 7%. Without forgetting the evolution of the cost of electricity, packaging and especially cardboard trays with + 26% between 2020 and 2022."

Another important point: the regulatory and societal pressure with a new 2021: the bee decree which imposes a major technical constraint and further complicates the work of producers already subject to the wind decree, which prohibits any treatment beyond 3 degrees of Beaufort (when the wind blows at more than 19 km/h).