'Lettuce mainly came in from Germany and Belgium'

Overall, the lettuce market was very quiet. Lettuce mainly came in from Germany and Belgium. According to the BLE in Frankfurt, a lack of rain and difficult growing conditions led to a shortage of domestic harvest volumes, which caused prices to rise sharply. Cologne also saw rising prices. Munich and Berlin reported steady business, although the quality of German offers sometimes was not up to snuff. This was also evident in Hamburg, where traders could rarely avoid discounts. 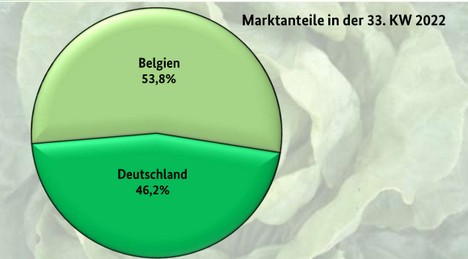 Market shares for lettuce in week 33.

Iceberg lettuce came from the domestic market and the Netherlands. Here, too, prices dropped in the Hanseatic city; again, poor quality was the deciding factor. In Frankfurt, increased prices caused demand to drop. In Berlin, Cologne and Munich, not too much happened in terms of prices. Colorful salads were sold continuously and the previous price ranges hardly changed. Here and there, however, limited sales forced traders to make slight reductions. Endives from Germany and Belgium increased in price here and there, although demand had not intensified significantly.

Apples
The presence of new domestic offers grew strongly. Delbarestivale, Elstar and Gravensteiner in gained in importance. James Grieve was a new addition to the range.

Pears
The importance of German Clapps Liebling and Williams Christ increased noticeably. On the other hand, the availability of products from the southern hemisphere decreased.

Table grapes
Sales were mixed: on the one hand, sales were limited in some areas, so that discounts were offered to speed up sales. In other places, demand was good, so traders were able to raise their prices.

Strawberries
The season was slowly turning into the home stretch. Shipments apparently limited and customer access was also steadily decreasing.

Peaches and nectarines
Although supplies were limited, they were sufficient to meet the steady demand. Demand was not particularly strong, and a certain degree of customer saturation could not be denied at this point in the season.

Plums
A wide assortment was available, in which domestic fruits dominated. The presence of Cacak's Fruchtbare and Hauszwetschge had obviously expanded. In addition, it was possible to access the first domestic Stanley.

Lemons
South African deliveries dominated over those from Spain and Argentina. Availability was sufficient to meet demand. Prices showed a mixed trend.

Bananas
Heat and the holidays caused limited demand in some places. To avoid surpluses, traders had little choice but to offer discounts.

Cauliflower
Local goods prevailed, with Belgian and Dutch offerings rounding out the product range. The high temperatures did not help demand.

Cucumbers
The range of cucumbers was made up of mainly domestic and Dutch offerings. In Frankfurt and Munich, increasing batches from Belgium again supplemented the range.

Tomatoes
The range consisted primarily of Dutch, Belgian and domestic offerings. Overall, supplies remained high, so that the demand could be met easily.

Sweet peppers
Dutch shipments dominated over Turkish and Belgian imports. Offers from Poland and Germany completed the week, in which all kinds of movement was recorded.