For three weeks now, Hokkaido pumpkins have been harvested in the Rhine-Main region. But a very weak marketing season is emerging, says Eduard Schendel, board member and sales manager of OGZ Rhein-Main. "Pumpkins do not interest anyone at the moment, which is absolutely understandable with daytime temperatures of 38 degrees. In addition to this, the yields are also not particularly abundant due to the persistent heat, which is why we expect a rather weak pumpkin year overall."

OGZ Rhein-Main eG has expanded its pumpkin production several times over the past decade and offers both conventional and organic edible pumpkins. In addition to the proven and commercially available Hokkaido variety, the butternut squash is also harvested.

"Especially with the organic Hokkaido, the yield forecast unfortunately looks very bad, in the conventional 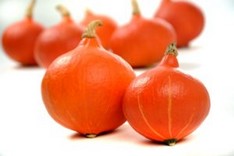 happening there has been enough goods so far. Overall, we still have to expect an early end to the season in December, while we can normally offer German pumpkins into January," says Schendel, describing the current supply situation.

Green bean cultivation on the decline
In addition to pumpkins, the domestic bean crop is now also gradually picking up speed. Schendel: "Especially regarding green beans, we are always in direct competition with Spain and Morocco. Yields in this product segment are also generally rather mixed, which is why the product is traded at quite high prices. These high prices are urgently needed, especially in view of the high labor input in cultivation, in order to be able to cover costs." Schendel adds that the trend in domestic bean cultivation is also rather negative from a longer-term perspective.

Sweet corn: massive crop losses shape events
Rounding out OGZ's summer vegetable offerings is sweet corn, which has become a staple in domestic grocery stores over the past decade. Here, too, the omens are rather bleak, according to Schendel. "Initially, yields were quite encouraging, but the weather has had a massive impact on the crop over the last three weeks, so we've seen losses of up to 25 percent with high, stable prices. Similar to pumpkins, current conditions point to an early end to the season by mid-September."

Unlike green beans, he said, competition in sweet corn is not coming from southern Europe, but mainly from neighboring countries. "Austrian and Hungarian goods are mainly represented on wholesale markets, and in food retailing, the Netherlands is a strong competitor. Nevertheless, German retailers strive to offer German goods during the domestic season. In general, however, the big boom seems to be behind us, as the area under cultivation has remained almost the same in recent years," Schendel continues.