"Early cabbage was cleared briskly, but unfortunately the volumes are lacking"

On the fertile Filder plain, cabbage is currently being cleared diligently, despite the heat and drought. The sometimes extreme weather conditions are also having a noticeable effect on crops in the southwestern vegetable-growing region, says Karl Schumacher, vegetable grower and managing director of the family business of the same name in Köngen. "The heat leads to increased problems with thrips in the medium cabbage sets, which in turn affects the quality of the produce. Especially regarding red cabbage, the quality problems and associated crop losses are already considerable."

Completing the summer cabbage offerings is the popular Fildererspitzkraut, a regional cabbage variety that is cultivated almost exclusively on the Filder plain. "We were able to harvest the first batches this week, but we still won't really start with the main harvest until mid-September," says Schumacher. In this category, too, the weather is having a noticeable effect on the quality as well as the yields, he said. 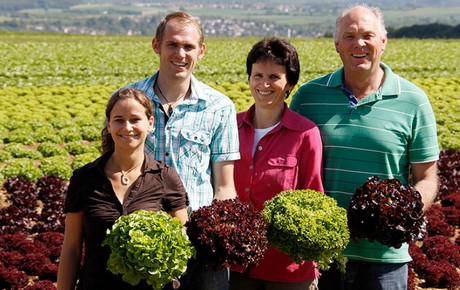 Karl Schumacher (far right) runs the company together with his wife, son and daughter-in-law.

Marketing-wise, however, the situation in the early sector has been quite good, Schumacher points out. "The early cabbage stock was all cleared relatively quickly with steady demand. But that doesn't help us now if the volumes are lacking. In short, we're in the same boat for all cabbages, and we're now hoping to be spared weather-related damage for the later cabbage sets."

Volume pressure in the lettuce market
In addition to growing and selling cabbage vegetables, the traditional company also deals with lettuces of all kinds. Schumacher: "Purchasing restraint coupled with considerable volume pressure led to a sluggish marketing situation. Sales of lettuce in particular have slumped the most. Recently, the supply in lettuce has been somewhat reduced, which is why sales are starting to roll again." Depending on the weather and variety, regional lettuce could be offered until the end of November, he said.

Continued buying restraint
Despite a slight recovery in the market, the vegetable producer, which markets its goods both through the Stuttgart wholesale market and directly to food retailers, is looking with concern at the continuing reluctance to buy.

"Consumers are trying to save money everywhere, and this is reflected in the decrease in volume for certain items. Organic goods, for example, have not been in as much demand since inflation began to rise and, in my opinion, has suffered the most. But the same applies to the entire higher-priced segment, whether in food retail, farm stores or weekly markets," Schumacher concludes.