Especially fewer imports from the Netherlands

The decline of imports from Spain was 'limited' to ten percent. However, German imports from the Netherlands fell sharply, by as much as 20%. The available figures indicate that this applies to both imports of Dutch-grown and re-exported products. Germany imported far less from other important suppliers in this year's first half too: Italy -17%, Costa Rica -4%, Ecuador -24%, Poland -14%, and Belgium -13%. Few countries showed a plus; these are South Africa +8%, Morocco +17%, Peru +9%, and Portugal +6%.

Greenhouse vegetables, in particular, lag
In the first six months of this year, Germany imported fewer of all the important products: bananas -9%, tomatoes -17%, apples -14%, cucumbers -10%, oranges - 12%, watermelons -25%, bell peppers -6%, and mandarins -6%. Only grape imports remained level. Several products showed substantial minuses, such as onions -28%, lemons -16%, and carrots -39%. Products that showed a plus were scarce: peaches/nectarines, avocados, melons, and cauliflower/broccoli.

According to the German CBS (SBA), in 2022's first half, that country imported 970,000 tons of fresh fruit and vegetables from the Netherlands. That is 20% less than the 760,000 tons in the first half of 2021. This source shows imports from the country where the crop is grown. In this case, imports of Dutch-grown products.

Eurostat also gives German import figures and uses country of origin. For the Netherlands' import numbers, that means the quantities include re-exports (and quasi-transit). According to this source, Germany imported 1.19 million tons from the Netherlands in the year's first half. That is 20% less than the 1.50 million tons over the same period in 2021. Thus, there were fewer re-exports through the Netherlands to Germany too. 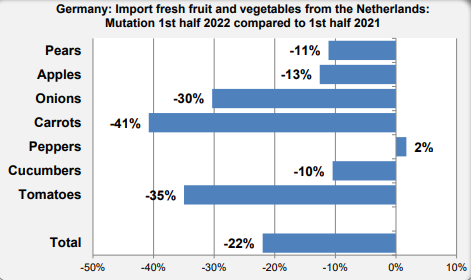 Far fewer tomatoes
Bananas are the top product that goes to Germany from/via the Netherlands. That includes re-exports. Others are tomatoes, cucumbers, bell peppers, carrots, onions, apples, and pears. The substantial drop in particularly tomato imports of tomatoes stands out. According to the German CBS, that fell by 35%; according to Eurostat, by as much as 40%. Cucumber imports from/via the Netherlands also showed a sharp decline; SBA -10% and Eurostat -26%. For bell peppers, the picture was different: SBA only Dutch product +2% and Eurostat incl. re-export -21%.

To complicate things further, we can compare Eurostat exports from the Netherlands to Germany (incl. re-export and quasi transits). That shows a six percent total loss. This smaller loss is mainly because Eurostat indicates various re-export products showing a larger export than German imports.

For example, in the first half of this year, somewhat more bananas were exported to Germany via the Netherlands than last year. Dutch export figures support the sharp decline in imports of Dutch tomatoes, cucumbers, carrots, and onions. The ten percent drop in bell peppers' (re-)export to Germany is noteworthy.

Average prices 10% higher
A ton of product generally costs, on average, more in the first six months of 2022 than a year before. At ten percent more, the difference was quite considerable for German imports.