After the successful launch of table variety Macarena in 2018 and the generational change in the company, Mecklenburg potato breeder Saatzucht Niehoff has set itself the goal of gradually expanding its food potato segment. At the upcoming Potato Europe, the company will present an excerpt of multi-resistant starch varieties and high-yielding food varieties. In an interview, Dennis Behrendt, who is in charge of crop production potatoes at the company, reports on the latest test and research results as well as the cultivation potential of the red-skinned Macarena.

"We will be focusing on four early and high-yielding food varieties in particular at the show," Behrendt says. "We have now decided to move more into the edible segment in parallel with the starch segment, in which we have been operating successfully for many years. Particularly important in this regard is the cooperation with our Polish partner HZZamarte, with whom we have already been working closely for several years. We will now further intensify this cooperation work by representing it in Germany and neighboring countries in the future." 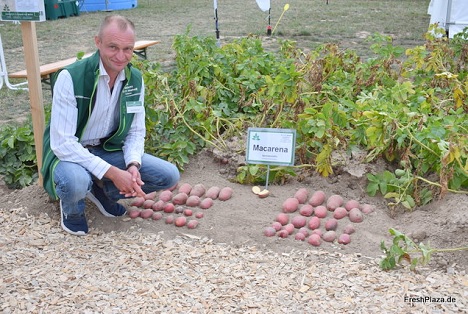 Gradual area expansion in Macarena
The development of the food variety program began in 2018 with the official presentation of the medium-early red-skinned Macarena at Potato Europe. "The response at the show was tremendous and there were many inquiries and interested parties from Ireland, the UK and Morocco, which we were not even able to serve at the time. From these initial contacts, 'fruitful' cooperations have developed in recent years, which is why the Macarena now grows and thrives on many farms not only in Germany, but also in Ireland," Behrendt says looking back. Most recently, the variety is being tested for the first time in the eastern German states of Thuringia, Saxony and Saxony-Anhalt. 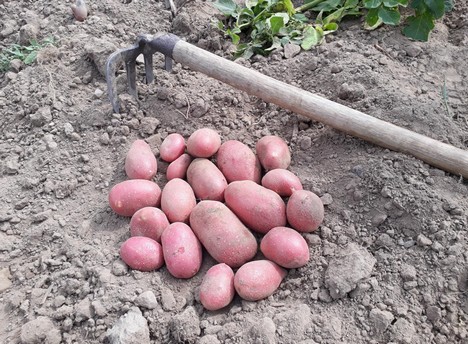 At this year's Potato Europe, the company will be presenting starch varieties Kuba, Novano and Skawa and red-skinned food variety Macarena (pictured). There is also a new starch strain with multi-resistance called Bü 13.1088.05.

Good results on different soils
According to Behrendt, many new registrations in the red-skinned segment are mistaken for the ubiquitous Laura. "Our goal is to achieve exactly this recognition value with Macarena." The decisive factor here is that the variety can cope with different soil types and growing conditions, the breeder emphasizes. "Both on the heavy soils in Lower Saxony and on the lighter soils in Mecklenburg-Western Pomerania, the variety showed pleasing results overall, i.e. net yields. The proportion of large-fallow tubers is also particularly high, which is why the variety is also suitable for the export market. So, if the potato grows under extreme weather conditions in Germany, I also see good future opportunities in countries such as North Africa."