As their first Peruvian blueberries arrive in China, United Exports reports that their variety OZblu® Magica remains the blueberry of choice for customers in the country. 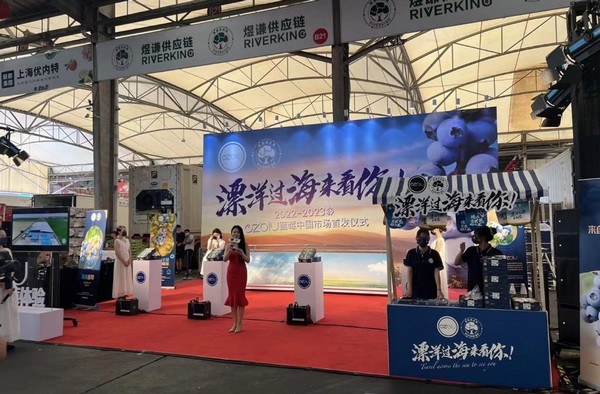 Commonly known as OZblu Magica, the variety has proved its popularity in China for the third year running. In 2019, the first shipment sold out within the first two hours of the launch. This year, the sales level for the first arrival peaked at ¥180 to ¥200 – the top price this market has seen for Peruvian fruit in the ’22 season to date – outperforming all other varieties on price by between 20% and 30%.

United Exports’ VP of Sales in China, Sean Li, said, “Chinese blueberry consumers are one of the most discerning in the world; they pay for quality. This variety delivers on that, time and again.”

These blueberries were produced in Peru by United Exports’ joint venture with agriculture business Migiva and brought to Shanghai’s Hui Zhan Market by Riverking International.

OZblu blueberries are known for their size, taste, texture and shelf-life and United Exports holds exclusive rights to market and sublicense the OZblu series of genetics. The company asserts that OZblu Magica is one of its key varieties that has redefined the blueberry category. Its shelf life has been independently demonstrated by a record sea voyage, a result of Covid-19-induced delays. The variety spent 51 days at sea and arrived, scoring a Green Customer QC and fresh and ready for sale.

When asked for comment, United Exports’ founder Roger Horak said: “This variety was selected to patent by top breeder Dave Mazzardis in 2009. United Exports has spent years innovating at a production level and has significantly invested in R&D. OZblu Magica is a category benchmark, delivering a superior, consistent eating experience and an extremely productive yield for the producer. And evidence suggests that the variety is highly sought-after by growers: we have had four IP thefts on four continents in the past three years! We have been successful in each case and will continue to defend our IP – relentlessly, so that we can continue to deliver good quality blueberries that offer a consistent experience to our customers and the consumers.”