"Organic cherries have the potential to become a top item"

VON HERZEN Biobauern Ltd, founded in 2008 in Puch (near Weiz) by fruit farmer and managing director Martin Pfeiffer, can harvest and market up to 25,000 tons of organic apples and organic pears annually. However, as co-managing director Hannes Schaffler tells us, the company also offers summer fruits such as blueberries, cherries, red currant as well as peaches and plums, all of which are produced in organic quality. Furthermore, Schaffler talked to us about the specialties of the East Styrian community. 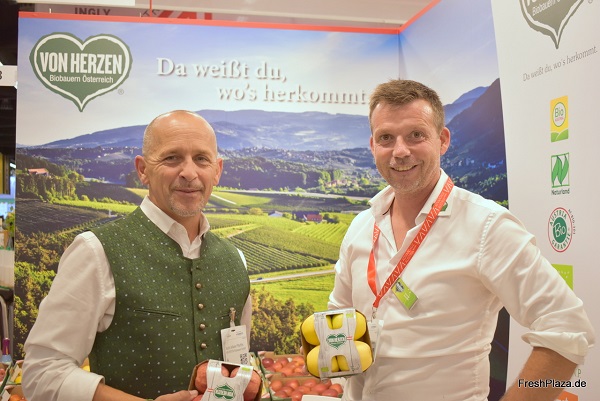 The two managing directors: Martin Pfeiffer and Hannes Schaffler (right) at their stand at Biofach 2022.

Topaz and Gala are the most popular varieties in Austria
"One of the Austrians' favorite apples continues to be the organic Topaz variety. This is grown in our region and can be supplied for over eight months, as we have a dynamic-controlled storage facility, which gives the apples a long shelf life. Topaz is very popular with our customers, not least because of its tart taste. It can be eaten virtually all year round because it is a very scab-resistant, robust natural apple," Schaffler claims.

In parallel, he says, the most popular variety in Austria is Gala, which, unlike Topaz, tends to carry a sweeter flavor and is smaller in size. "This variety is particularly suitable for children, but also for making compote or for fresh consumption, for example as a snack during breaks. It should also be emphasized that it is very well received by our export markets in Scandinavia and in England, where we can sell very large quantities. As soon as the German season comes to an end, we export our apples to Germany as well."

Because Topaz is a very frost-sensitive variety, yields vary from year to year, Schaffler said. "Per hectare, we have about 30 tons of yield in a normal year, which multiplied by 5-6 gives us about 200,000 apples that we can harvest." 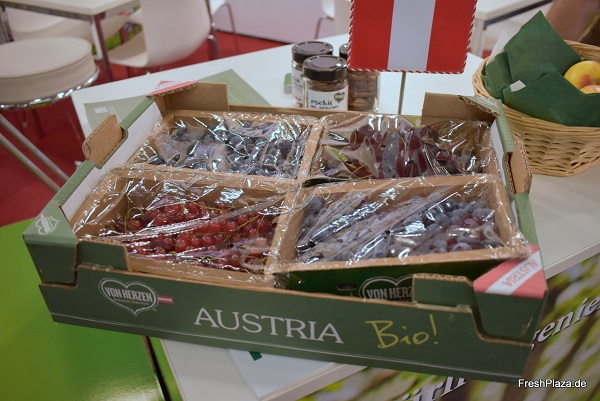 Red currant, blueberries, cherries and other fruits that are of organic quality are also part of the company's product line.

25 percent organic acreage in Austria
Referring to figures published by the Austrian Chamber of Commerce, Schaffler knows that the share of organic produce sold in Austria is 11 percent. "In turn, the area share is just under 25 percent. So compared to other countries, the organic share of fruit production here in Austria is quite high. In the Austrian market, however, people are still somewhat restrained as far as sales of organic products are concerned, which is why we also export our goods. Depending on the season and depending on the month, however, we have an organic share of 12-15 percent in Austrian food retail."

Rising demand for organic blueberries
"Organic blueberries are a very popular summer fruit and are experiencing increasing growth in Austria. Especially among younger generations, blueberries are very well received. We still see a lot of market growth potential for this product. We are of course delighted to have another product alongside the apple that is going down well with consumers. The challenge again lies in finding the right packaging and, above all, the right size to convince customers," Schaffler says.

More cultivation of red currant and peach questionable
For items such as red currant, which would appeal only to a small clientele, he in turn does not see much potential for development. "For organic peaches, we do see a good sales trend. However, this fruit presents growers with various challenges from a production standpoint, which is why they are refraining from further development. After all, growers should be able to earn something, which is not evident with this product."

20 percent in sales of organic products as a declared goal
Asked about the price development, Schaffler emphasizes the need for customers to continue to be able to afford the goods and, at the same time, to make greater use of organic products. According to him, this serves both the climate and sustainability throughout Austria. "Maybe in a few years we will manage to reach the 20 percent mark in the sale of organic goods. After all, we are equipped and also have enough goods available to be able to meet this demand. Given the good quality we offer, this should also be achievable, especially if we create better awareness among consumers," Schaffler says. 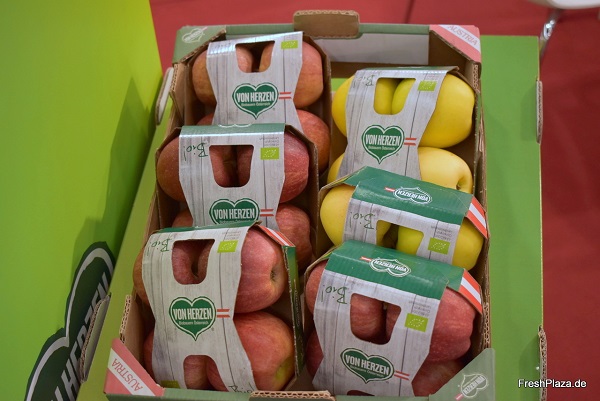 Large increase in storage costs
However, the cooperative from Styria is not spared from high production costs. "We work with cold storage facilities that are constantly in operation, which now run on electricity. We can cover a part of it partly through our photovoltaic system. But we generally expect a marked increase in costs in the warehouse area," says Schaffler.

"Packaging costs have already increased in the last six months. Since organic goods are mostly offered packaged, costs in that area naturally affect us as well. Especially if you look at our packaging, for example, which consists of 100 percent cardboard material. There, prices have risen by around 25-30 percent compared to the previous year."

Thanks to large orders in the previous year, the company was able to cover its packaging requirements well. However, the situation regarding new orders will be challenging. In terms of transport costs, the managing director expects an increase of 25 to 30 percent. "At the moment, we are not yet able to find any alternatives that are ready to talk about in order to be able to regulate the issue of transport in the coming year. For the growers themselves, production costs, i.e. for fuel and personnel, have also increased noticeably. Especially as it is relatively difficult to find personnel at all for the usual operations," Schaffler concludes.