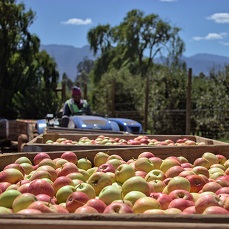 Nine months of the year the Dennegeur packhouse in Grabouw is busy with approximately 17,000 tonnes of apples until the last of the stock has been sent out by the end of November of the beginning of December.

“Dennegeur is a 100% integrated company: we produce, we pack and we market a large part of our fruit. Exports to the traditional markets like the UK and the European Union, we do 100% ourselves, as well as a part of the Far East,” says Stephan Beukes, Dennegeur CEO.

The family farm has been in the Beukes family for generations and over the years, Dennegeur has acquired a series of neighbouring farms to expand their own production, while also taking in apples and a small amount of pears from a number of independent producers.

Dennegeur has remained among the smaller apple production companies after largescale consolidation over the past few years. 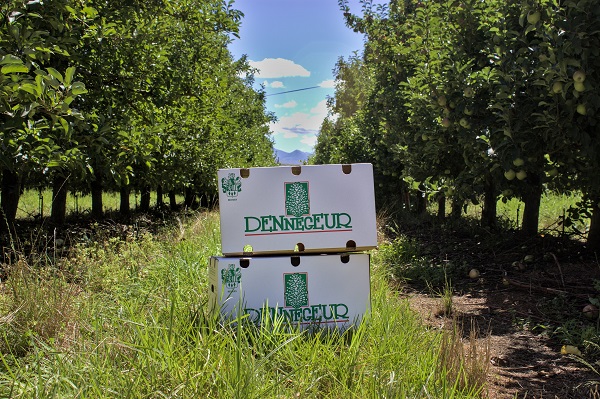 “We’re very sensitive to our role as custodians”
“Our size and our relatively short supply chain make us unique: we have one foot in the orchard and one foot in the market. Because of our size, we know exactly what the fruit from our orchards will look like and we can accurately market it to our direct clients. We’re more than 50 years old, and there aren’t many companies with that kind of longevity.”

He adds: “At Dennegeur we’re very sensitive to our role as custodian and we have an integrated environmental management system to ensure we farm sustainably. We are running various environmental projects including the rehabilitation and restoration of unplanted areas.”

Part of Dennegeur’s longetivity is the strongly developed sense of community among staff, some of whom are third-generation employees who also attended crèche and even primary school on the farm; in the 1960s Sas Beukes, erstwhile owner of Dennegeur, donated a piece of the farm for a school to be established. 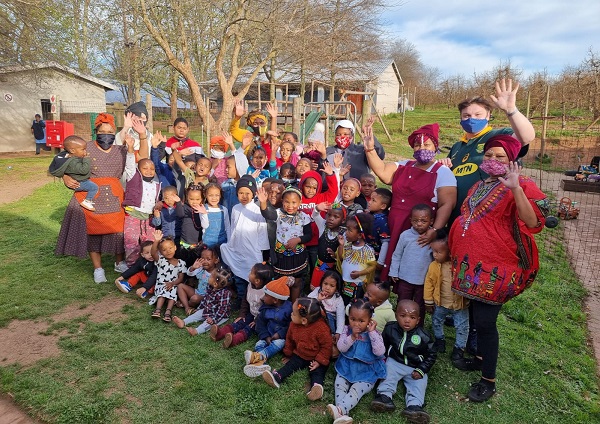 Emphasis on mental health
“Social development is an important part of our business, not only because that’s what retailers require but it’s important for us as a family,” says Carina van Wyk, CEO of the Dennegeur Foundation. She notes that in conversations they have with retailers, the importance of ethics and social development is very clear, as it forms part – along with environmental management – of a farm’s sustainability.

Not only the physical wellbeing of staff is tended to (a gym helps packers to cope with the physically demanding nature of their work and a medical clinic has long been in operation) but mental wellbeing as well.

“Our mental health programme which has been running since 2016 has been one of our biggest success stories,” Carina says. 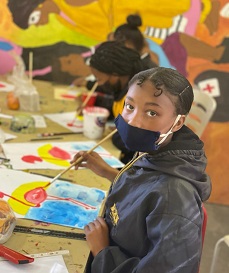 “Seventy percent of the children at the creche have experienced or witnessed some form of trauma. We have three therapists. Without this programme we never could have helped these children, and we can give them counselling in all three languages of the Western Cape. I can’t emphasise mental health enough.”

Employees’ children between the ages of ten and thirteen attend a weekly arts and music class.

“I want to show them that there’s a wider world out there,” she says. School trips, like those to Johannesburg where the Dennegeur marimba youth band has competed in international competitions, markedly broaden the horizons of the farm children of Dennegeur. 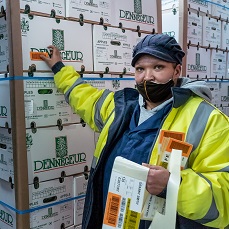 In Europe, where domestic stocks are at their lowest levels before their new season starts, they’re seeing quite a strong demand for South African apples, he says.

Dennegeur has a strong focus on retail programmes in Europe. “I think apples are in a better position and operate in a more stable environment than most commodities. Apples are always in the basket.”

And even more so during Covid, he remarks, when apples’ value per kilogram and long shelf life adapted to the infrequent shopping trips allowed.

The UK had a larger domestic Royal Gala crop this year, which reduced the window for South African apples which occupy only a sliver of the year’s supply, between two weeks and a month. The traditional European buyer takes apple sizes of 70mm and bigger, while in the UK the demand is more towards the medium and smaller fruit, he says.

“I think the UK and the EU will always remain important markets for our apples because of the window it gives specific cultivars and shipping to Europe is probably among the most stable.” 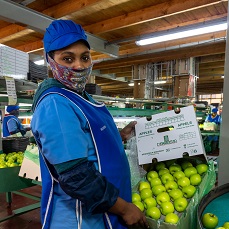 Overall the South African apple industry has exported 11% more apples to Africa so far this year, he says, a total of 5.4 million 12.5kg cartons by week 28 this year.

“A large portion of our fruit goes to Africa where we work through export agents,” Stephan says. “East Africa is a strong market for Granny Smith and Pink Lady/Cripps Pink, while West Africa is very strong in Goldens.”

A lot of externals influence trade in Africa, for instance how big the window for South African apples is in the UK and Europe and what the shipping opportunities are. Buyers’ ability to pay is under pressure and in Africa a further challenge to trade is that many countries have policies of foreign currency control. 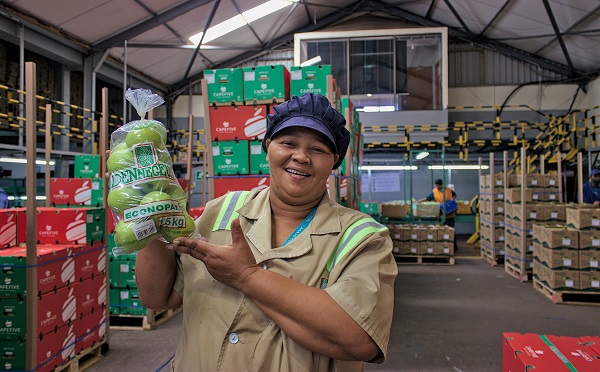 Apples packed for the local market

Strengthening of US Dollar favours alternatives to UK, EU
“There’s been a shift over the past 20 years drastically away from Europe and many new markets have opened for us, especially in the East and within Africa,” Stephan observes.

In the Far East, imported apples Imported are more expensive than the local, often tropical fruit, which is a factor that influences sales. That said, China is a strong market for Fujis and Vietnam grows strongly and what makes the Vietnamese market attractive, it that it takes a wide range of counts.

Dennegeur’s apples also go to Vietnam, Malaysia, Singapore, Hong Kong, Indonesia (a market that is very specific on counts) as well as to the Middle East. 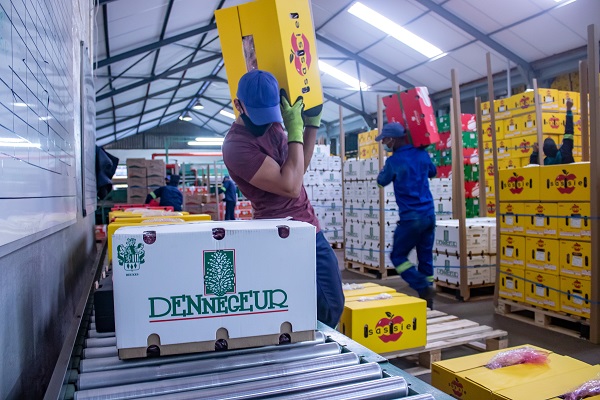 “In the current environment what plays a large role is the strengthening of Dollar against the Pound and the Euro, because many of the new markets are primarily Dollar markets,” Stephan says. “The relative weakening of the Euro to Dollar reduces returns and traditional markets like the UK and the EU become less competitive. And also, freight costs are in dollars. For the past 6 months this has been playing a big role.”

Climate change and apples
At the recent Hortgro technical symposium it was again noted that Grabouw has been mentioned is an area where climate change might change the climate in ways unfavourable to, specifically, red colour development. 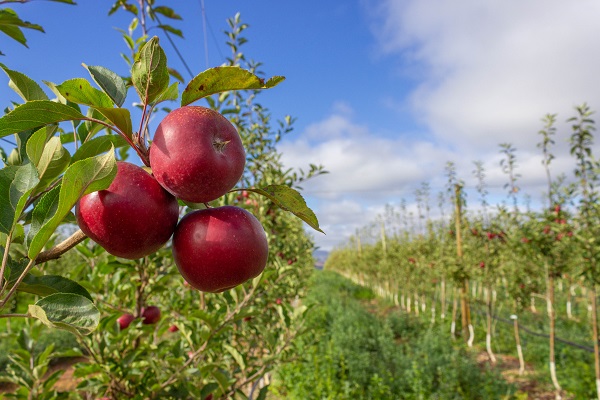 “Climate change is definitely high on the agenda, and we’re keeping an eye on it,” he says. “We’re blessed with very good water supply, even in dry years.”

In 2018, during the western Cape’s severe drought, the Grabouw Water Users Association released water from the Eikenhof dam, built by farmers in the seventies, to be pumped to Cape Town during the drought.

“We have a mild maritime climate and in Elgin and Grabouw we’ve never planted apples (for instance the spur-type cultivars like old full-red cultivars) with very high cold requirement. We have always had mild winter cold.” 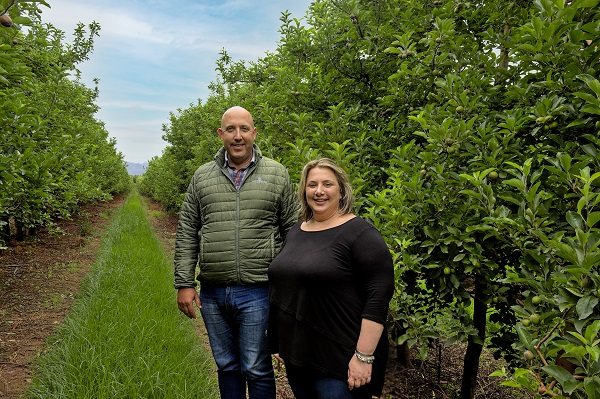