"There are basically three production areas in Italy," explains Ivo Poli, President of Associazione Nazionale Città del Castagno, who helped us get a clear picture of the chestnut situation, as things can be quite different between the north and the south.
"The first production area is that in northern Italy as far as north Tuscany. Production was good this year. In southern Tuscany and central Italy (second area), production was not as good but grades were bigger." The situation is more varied in southern Italy. "Basilicata experienced a 30% increase in production with respect to last year, though it must be said that volumes had been particularly low in 2015 due to chestnut gall wasp problems. In Calabria, the drop hovers between -30 and -50% and even reaches -80% in Campania, especially in those areas where it rained a lot in spring." 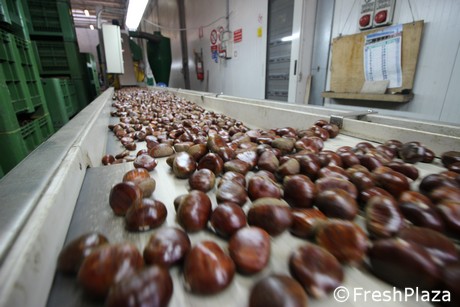 Over the past few years, the chestnut gall wasp was behind most of the drops in production. "The insect will never go away, but luckily we have managed to control it thanks to an antagonist (Torymus sinensis). We will have to wait for the two insects to reach an equilibrium, which is already happening in the north."
Nonetheless, problems were not due to the chestnut gall wasp this year, as it was the excessive rain in spring followed by an extremely dry summer that caused most of the damage. "In central Italy, the lower production was determined by scarce setting in spring. The same happened in the south. It remains to be seen whether this year was exceptional or if it will be the norm from now on."

All this is leading to chestnut cultivation being abandoned, which may also cause hydrogeological instability, as most of groves are in mountain areas. "Italy is actually the only one in this situation, as Spain, France and Greece are all planting new hybrid varieties. Eastern Europe is also growing, as is Chile."
The three leading chestnut producers in the world are China, Korea and Turkey. "Italy occupies the fourth place with 50 thousand tons in a normal year, though this data is not certain as, despite the many requests for a census, Istat still has no way of knowing how many chestnuts are produced. Only the data concerning imports and exports is available. We know Italy is the biggest exporter of chestnuts and chestnut products, but we also know it exports more than it produces, as it imports volumes from Spain, Portugal, Greece and Turkey, which in turn import fruit from China."

"Foreign produce is cheaper, as we are talking about intensive industrial cultivation. In Italy, many producers and harvesters are only working with chestnuts part-time, which of course also limits investments. "We have asked the EU to hand out its contributions to all chestnut grove owners as, at the moment, only professional growers can access the funds."
This could be a way to relaunch investments within the sector. Another option could be to develop new agronomic techniques. "Uncultivated lad could be used for more orchards, grafting productive chestnuts on wild chestnuts."