"Dutch horticulture has a future"

After some difficult years in the greenhouse vegetable sector, 2015 was as a good year. But Hans van Luijk, the director of the growers association Van Nature, does not think this was a lucky year, "Supply and demand determine the market. Once every few years the climate and conditions of the market are not optimal for Southern European production. That is what happened this year, and we took advantage of those conditions. Next year the summer could be very different if production in Europe is very high elsewhere, and the market could become flooded. But we are confident about 2016."
"At first the tomato season did not look good. But in the end the tomato season did better than expected, with the exception of individual tomatoes. Due to certain climate conditions elsewhere, there was a great deal of demand in Europe. Things went well in the summer and most of the growers now look back on a good year," continues Hans. "The bell pepper market was doing better at the beginning of the season, but also did well in the fall. Cucumbers also had a good season. Spanish products came onto the market in time and the summer and fall demand was particularly good."

"The positive year gave the growers some time to rest. Everyone worked hard and put all their energy into their respective companies, and it is wonderful to see all that hard work paying off. Moreover, obligations to lenders can be met, which brings a sense of peace. I am positive about the future of Dutch horticulture and I do not buy into doomsday stories. In terms of climate and location, the Netherlands is in a good position, and that will not just disappear."

Open doors
"I believe the partnerships, which are increasingly sought after, are positive. The agreements in 'Coalitie HOT' (HOT Coalition), between growers associations, Rabobank and the government under the leadership of Cees Veerman, can make a big difference," expects Hans. "In recent years most organizations have been focusing on their own companies. I hope now that more doors will be open so as to encourage social cohesion and respect for each other's views. There is a lot of work to be done in the areas of lobbying, advocacy, market access, market intelligence, etc."

"We have always sought cooperation. Currently, we are in talks with Best of Four regarding a possible merge. The leadership has agreed to the merge, but the final decision will be made in February by the growers. If we merge we will have many more opportunities in the market, in part due to a wider assortment of top fruit and other products, and more varied vegetable crops. This was not necessarily something that had to be done, but with this move we will be able to more widely serve our partners and customers," says Hans. 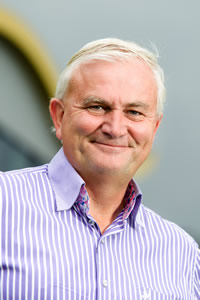