Yesterday, the Netherlands got reacquainted with the onion. At the International Onion Congress in Middelburg, the new promotional campaign was introduced, and news sites reported that the Dutch onion isn't "just an onion", but has a leading position in the world with over 15% in the global export market. Nearly everyone in onion exporting and packing in the Netherlands was present at the launch, including suppliers, breeders and government representatives. Together with international guests from Germany, Poland, Spain, France, the United States and Denmark, this made for a turnout of over 120 people.

Chairman Gijsbrecht Gunter of the Holland Onion Association painted a picture of the global onion market, with a production of 70 million tonnes, around 90% of which is consumed locally, and 8% exported. In view of the increasing global population, particularly in areas where many onions are consumed, Gijsbrecht said a production volume of 120 million tonnes in 2050 would be a realistic scenario, saying he expected the export of onions from the Netherlands to be able to grow to 2 million tonnes until 2050. He said it would be a challenge to better present the entire Dutch onion story internationally, from breeding to sustainable cultivation, packaging, export, and efficient logistics. Provincial executive Jo-Annes de Bat then revealed the new promotion concept, with an actual onion cake becoming visible. 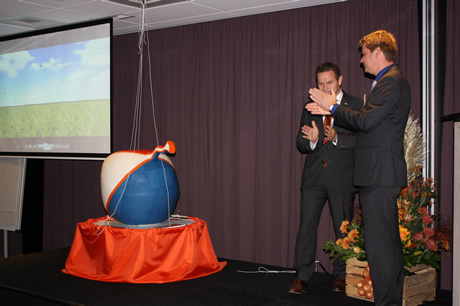 Jo-Annes de Bat and Gijsbrecht Gunter with the onion cake

After Hans Christophe Behr presented the European onion yield figures, Wayne Mininger of the National Onion Association from the US took to the stage. He talked about the population in the USA, which exploded from below 100 million to 320 million. Since the Second World War, Mininger said, American agriculture has realized an annual 2.1% increase in production. In the same period of time, the average amount of income an American spends on food, has halved from 20 to 10%. He said the idea for the American onion industry is to supply every category with onions. "We are a nation of immigrants, and with more ethnic backgrounds, we expect more diversity in culture and culinary preferences compared to any other country in the world. We supply them with onions in all seasons, colours, sizes, both peeled and frozen." 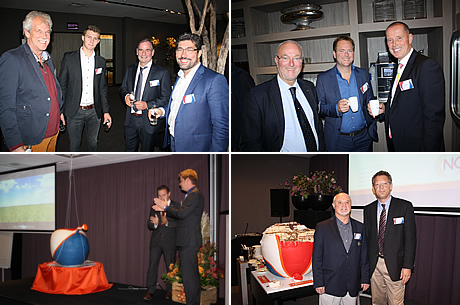 "People buy with their hearts"
Although the North American onion acreage has decreased slightly in the past decade, productions have remained stable. Canada is by far the main export market for the American onion growers, followed by Japan, Mexico and Taiwan. The import mainly comes from Mexico, Canada supplies a reasonably stable volume to the US, and Peru is on the rise. Domestically, about 50% of American onions end up in consumer kitchens through retail. The other half is sold in kitchens of hospitals, schools and prisons, and food service channels like restaurants and food trucks. Mininger said that American onion growers respond to consumers' lifestyle choices in their marketing. "People don't just buy with their eyes, but with their hearts as well!"
Wayne Mininger said it is remarkable that all continents are seeing manageable yields and even shortages. He said that he often reminds the American onion growers to find verifiable sources of information. "Armed with factual data, you can really service the market. Cultivation is already a gamble in and of itself. Hunches and feelings are seldom a good counsellor. A good business plan begins with fitting funding, good tillage, cultivation, and development of a marketing plan." 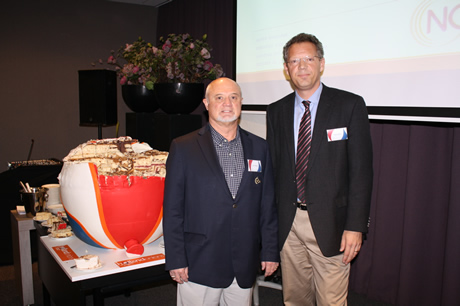 Thomas Eskesen, former vice president at Maersk Line, talked about the latest logistical developments. He called shipping one of the fastest growing industries in the world, with a 5% annual growth being expected until 2020. In 2009, however, this sector was hit hard by the economic crisis. He pointed to the permanent shift from production economies to low cost countries and the increasing containerization. "While five years ago most of the entrepreneurs worked with shippers on an ad hoc basis, alliances are now the rule in this industry."
Scale crucial in shipping
Thomas said scale is a crucial factor, and that bigger and bigger ships are being constructed to survive. He said that the American exporters were affected by the strong dollar, while imported had a two-digit growth rate. The reverse applied to European export, where the fresh export profited from a weak Euro in 2014. Thomas called the logistical position of the Dutch onion exporters favourable. "A huge flow of containers is coming from Brazil to the EU. If there's anything shippers hate, it's empty containers, they can be sent back with onions. The same applies to ships with bananas from West Africa. With the Bremerhaven, Rotterdam, Zeebrugge, Vlissingen and Antwerp in the vicinity, you have plenty of opportunities."
After the talks, there was a buffet, and the atmosphere in Middelburg was good for many hours. The site www.holland-onions.org will be updated frequently in the coming period, with new videos and articles.