The Fräulein apple variety was discovered by fruit grower Gerd Sundermeyer and has enjoyed great popularity ever since. Since the fall of 2020, this variety has also been grown and marketed by Elbe-Obst Vertriebsgesellschaft. Frank Döscher, Managing Director of Elbe-Obst, spoke with us about the impact of current conditions on the Fräulein's development. He also looked ahead to the year 2022. 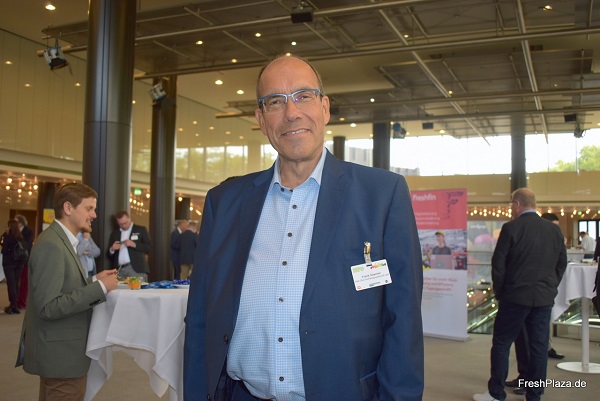 Frank Döscher at the German Fruit and Vegetable Congress 2022.

One million Fräulein trees
"Throughout Germany, around one million trees are planted for the Fräulein variety. Despite existing crises, club varieties like Fräulein must continue to be offered. And in order to survive, you have to stay on the ball. Especially since it is also a good substitute group for varieties like Jonagold," says Döscher.

"We have built up the quality and marketing elements for Fräulein well, even in the third year. This makes it easier to communicate with the big grocery chains. We also have a red-fleshed variety called Kissabel, which is good for two- to three-month promotions."

"The strongest varieties, meaning the ones with the biggest value chain, will prevail," Döscher said. "It's no good if you produce 200 tons of one variety but can only offer it for one month. Certainly if you agree on liabilities with the food retailer, you need a variety with a certain tonnage and reliable volumes over a longer period of time. Those will be the varieties that can stand out from the smaller varieties, and that can position themselves accordingly."

Selling price below previous year's level
"Our selling prices are currently 15 to 20 percent below last year's levels. There is a danger that you can no longer earn what you need  to earn. Producers in particular are experiencing economic hardships because they cannot pass on their cost prices," says Döscher.

Higher demand for standard instead of premium products
He adds that it is also noticeable that consumers are increasingly buying standard instead of premium goods. "Exclusive offers at Christmas were often left behind. Consumers are currently more price-oriented. They are more likely to reach for carrier bags with 2-3 kg of apples, which are low-priced and downright aggressively priced in the promotion," says Döscher. He emphasizes that this is the development that has been seen since September.

Double the amount sold to industry compared to last year
"Growers have had to market their apples to the industry, for juice production, for example. In some cases, they left entire batches hanging on the trees, as the marketing prospects had simply been too poor. There was a fear that increased storage costs would have to be paid from November onwards, without receiving the necessary compensation for it," says Döscher. "In the industrial sector, we sold almost double the volume compared to the previous year. However, the industrial prices are not too interesting in themselves, as these are primarily sortings of leftover goods with a correspondingly low added value."

Export markets remain difficult
But even the production of Germany's most popular fruit is not spared from the high costs of electricity, gas, fuel and wages, as well as from the significant shortage of personnel. "Container prices have skyrocketed, while the prices for everything have gone up. If you operate internationally, you also have to deal with international price ratios, where in the end it also makes no difference where the goods come from."

Apart from Germany, he said, some Asian countries such as Singapore, as well as Dubai and the United Arab Emirates, are also interesting markets. "During the pandemic, countries also faced various other problems. On the one hand, there was a lack of freight logistics, and our prices were also too high for the markets. On the other hand, new opportunities also emerged at that time. There is definitely some growth on the horizon." The Chinese market is closed to German production anyway, he said, while in India they have already been doing tests for three years.