The Greek pear season has been going rather smoothly, says Paris Karastergios, import-export coordinator for Greek produce exporter Kastargiou P. Bros S.A.: “At the moment, we are about to end the sales of the Santa Maria pears. It was a good season for this variety quality wise, with blushed, medium sized fruits, mostly sizes of 60/70. Almost 95% of this variety is destined for foreign markets, mostly Israel, Jordan and Lebanon. This season, although the quantity of category II pears is smaller compared to previous campaigns, we find difficulties to sell these pears, despite the low prices.”

“The demand in Israel was high for larger sizes from August to October, calmed down in November, and it is picking up again now. As for smaller sizes, Jordan which is our main market for Coscia pears and for the smaller Santa Maria, the market was oversupplied in autumn with pears from countries like Syria and Lebanon, but for these pears demand is also picking up again now. We will start offering our late variety, Blanquilla, in January, in order to continue offering high quality pears to our clients. The feedback that we get from our clients is positive, the quality is really high, and in general Blanquilla campaign seems promising.”

Although the costs of storing pears in cold rooms has become very expensive in Greece, Karastergios states they don’t really have the option to sell the pears straight from the orchards, as they harvest them during the summer: “Electricity costs are outrageous in Greece, we face increases up to 110-120% in our electricity bills, which leads us trying to sell our supplies as early as possible. However, because most of our pears are summer varieties, and the temperature during picking, which is mid-August, is really hot. Selling directly from the orchards is really difficult, given that we have to apply precooling treatment before loading.” 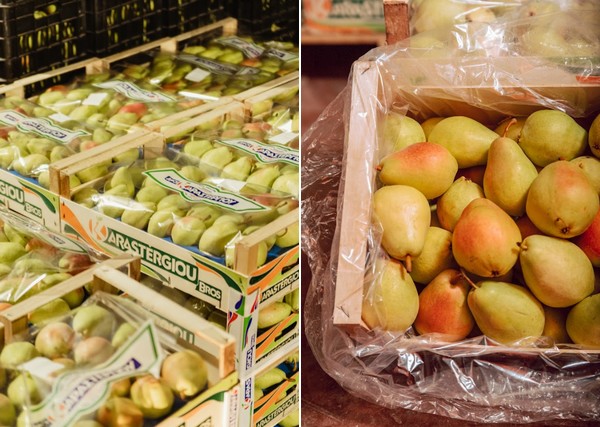 The fact that Poland is increasing pear plantations doesn’t worry Karastergios, as they will cultivate a different variety. He does feel Polish pear cultivation will have an impact on the European market. “As far as I’m concerned, Poland plants mostly Conference pears, the most common variety in the Western Europe. Those plantations will definitely put a stress in the market, given that, production costs remain lower than countries like Holland or Belgium. However, because our markets prefer pears with cleaner, not rusted skin, like Santa Maria, D’Anjou, Bartlett and such, the competition from Poland should not be so direct, but for sure the prices in all European countries will be pushed down.”