Wholesalers and certain retailers, not only in South Africa, have been discovering they can source almost everything they need on Nile’s digital trading platform. Farmers load out orders which are already paid for, thereby reducing many of the uncertainties of the conventional market model.

“Our main task is to create trust between two parties and to render the transaction between them effective and safe. We don’t take ownership of product,” explains Louis de Kock, founder of two-year old Nile, a platform that offers over 40 product lines, packed into 500 different unit types and grades.

“The Nile platform offers a wide variety of produce in one place to buyers, while simultaneously also putting a farmer in direct touch with many buyers.”

FreshPlaza visited their crossdocking facility located between Pretoria and Johannesburg where a truck from the eastern Free State was loading produce. Gauteng makes good sense for buyers from South Africa’s rural provinces and neighbouring countries, an increasing number of whom now prefer to pick up their prepaid orders from Nile at the crossdocking facility.

“We’re not looking to replicate the traditional channels in digital form”
Nile aims to fundamentally differ from traditional marketing channels which have started to take note of the newcomer.

“We thoroughly consider all aspects of our operations, otherwise we’re just replicating the traditional market in digital form. You have to profoundly change the value chain,” he says.

One aspect would be that in their model, farmers are price-makers: on the platform they offer a catalogue of their product, along with minimum sales units, and the price they want, depending on whether a buyer collects at the farmgate or at Nile’s crossdocking facility.

Or a farmer receives a paid-up order (which they’ll soon be able to receive wherever they are with the Nile mobile app in development) which specifies the packing or processing requirements of a buyer. A farmer typically receives payment within 48 hours and Nile is able to charge a substantially lower commission by digitizing many of the recurring actions inherent to fresh produce trading.

“Many similar models exist in other emerging markets that have been successful in linking farmers to informal markets, which gives us confidence that our solution could also eventually reach informal markets,” he remarks. “One such example is Twiga in Kenya, which has developed a massive footprint in the informal market trading space.”

Nile offers transport solutions to buyers who do not own their own fleet. “By combining smaller buyers on a given route, we can deliver smaller amounts to individual buyers in a commercially viable way.”

Efficiencies in receiving produce limit handling costs
“We are focused on ensuring that we operate the most efficient cross-dock facility for fresh produce, while simultaneously limiting the costs of handling and ensuring a longer shelf life for end consumers,” he says.

Up to a hundred trucks visit the facility each day, starting early in the evening – nearby Brits farmers first, followed by the Mpumalanga Lowveld and Limpopo Province, while those coming all the way from the Cape arrive all through the day. And yet, it was a conscious decision not to have a parking lot.

Despite the high truck volumes an even flow is maintained because produce is offloaded as quickly as possible and taken either to the ambient store (bulk vegetables) or to the cold stores set at 8°C and 2°C respectively. The company is also exploring options to move off the grid through solar solutions.

Inside the crossdocking facility, space is used to the max: for instance, watermelons are stacked in bins instead of taking over large amounts of floor space.

Quick offloading of the trucks bringing produce from farms is a priority; Louis' upbringing on a Northern Cape farm taught him that farmers need their fleets to remain in circulation.

Another plus to growers is the large Freshmark distribution centre which is only around 8 km away; via Freshmark many farmers supply Checkers and then it makes sense to pop around to Nile.

Image recognition AI will become integral to the process
The founders of Nile have a futuristic vision for Nile. Louis has experience in creating the future during his time at Amazon Go’s payment point-free grocery stores where he was head of fresh produce.

Buying produce without seeing it takes a leap of confidence (they’ve noticed that some buyers try out different producers of the same line) and it requires a digital platform to put careful thought into quality assurance, with the assistance of agencies like the Perishable Products Export Control Board which conducts onsite inspections of produce for crossborder buyers.

“For Nile transactions, a farmer takes a picture of the consignment on the farm, while we take another set of photos. We already have a substantial amount of data sets for the various commodities. Image recognition software will enable a more objective and more holistic approach to product grading, including aspects like Brix levels and shelf life.” 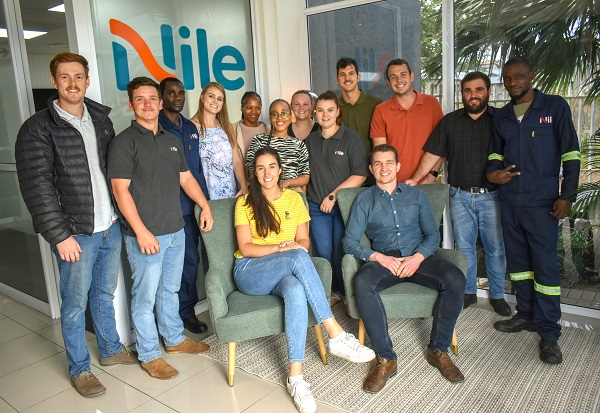 Nile was set up to facilitate exports
From the start Nile was conceptualized as a crossborder trading platform, as its name’s echoes of the origin of agriculture and trade route indicate.

Wholesalers and retailers in neighbouring countries have discovered Nile as an alternative to the Johannesburg municipal market.

“We think there’s a big opportunity for mutual trade between Southern and East Africa,” Louis observes, pointing out that mutual trade offsets currencies against each other, thereby reducing the onerous restrictions placed on intra-African trade by forex availability.

Kenya is a big focus as Louis also worked for Jumia, the large Kenyan ecommerce retailer. “Since I lived in Nairobi five years ago,” he says, “the retail sector has developed a lot with much better fresh produce on the shelves as the middle class has grown. One can expect that to continue.”

Citrus has gone via the Nile platform to West Africa and to India.

“If you think how long unwashed potatoes are stored in Africa, it’s very suitable to rural households who might want to keep a bag for a month or longer.”

Nile experiences a high demand for all grades of potatoes from as far afield as the Democratic Republic of the Congo.

Information sharing is a market function
“One of a market’s functions is the exchange of information and we should do the same,” he notes. “Buyers and sellers will always need information and if we want to become an alternative to traditional markets over time, or at least take over a larger share of the fresh produce industry, we have to fill that function as well.”

At the moment Nile sponsors the weekly market updates by AMT Trends as well as a bimonthly update on potatoes and onions compiled by Pieter van Zyl, erstwhile head of data at Potatoes South Africa.

Anja Burger, head of Nile marketing remarks that on recent farm visits they saw first hand the damage done by the recent rains when farmers could not enter their fields. On one of their supplying farmers’ farms the entire tomato and sweet pepper crops were lost to hail three weeks ago.

Nile launched during the Covid pandemic. An enforced familiarity with ecommerce has eased their way, as do younger generations on farms who are more ready to make a digital switch.

“We have a hybrid approach: we want our farmers and buyers to go on a journey with us to get completely comfortable with the system. We get massive scalability from our system, but still maintain a personal touch through relationship managers that are always available to assist farmers and buyers.”