Ecuador exported 34.1 million fewer boxes of bananas up to October 2022

The world leader in banana exports, Ecuador, has seen a -10.81% drop, with 34.1 million less boxes in exports from January to October 2022. A cumulative 280.0 million boxes were exported, compared to 315 million boxes during the same period last year. Export volumes to their top two destinations saw a decrease of -14.66% for the European Union and -2.19% to Russia.

The lower volumes are due to several factors that include colder weather in Ecuador that decreased production, the impact of a crippling strike in the main production areas in the middle of the year, and the Russian war in Ukraine. The effects of inflation in other markets can also be seen. 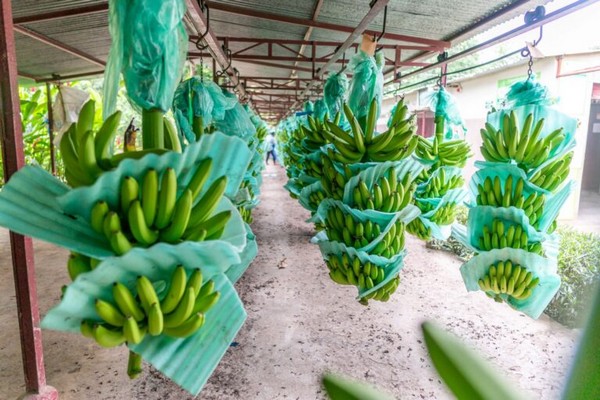 The statistics are based on the latest reports issued by the Ecuador Banana Marketing and Export Association (Acorbanec) and the Association of Banana Exporters of Ecuador (AEBE). According to Richard Salazar, from Acorbanec, “The colder weather during key periods led to lower production. Some farms were also in quarantine. There was also a normal reduction in summer demand in Russia, Europe and the Middle East and other markets that all contributed to lower exports. The losses in exports from the 18 day long nationwide strikes in June that affected our major production areas, was hard to recover from.”

José Antonio Hidalgo, Executive Director of AEBE, said at Fruit Attraction and other conferences  they continue to engage in discussions with European retailers to support Ecuador’s banana industry with fair prices and contracts. This will allow them to meet ever more stringent sustainability criteria set by certification bodies as well as supermarkets, but that comes at increasing costs to producers: "We have continued to meet with European authorities and with these actors to change the concept of value purchase.”

Guayaquil leads the participation of boxes sent by port with the shipment of 64.85% of the total boxes exported, followed by Puerto Bolívar that sent 23.62%. Posorja had a participation of 11.53%.

Of the total amount of boxes of bananas exported up to October 2022, 85.69% correspond to containers and the remaining 14.31% were exported in bulk. The top three participations by brands are made up of Dole in first place with 10.40%, followed by Bonita with 3.78% participation and in third place is Favorite with 3.63%.

The average number of sheaths in October 2022, which corresponds to weeks 39 to 43, in the province of Los Ríos was 40.78. Meanwhile, in the province of Guayas it was 33.98 sheaths per week. Finally, the weekly production average in El Oro was 31.13 sheaths.

Other factors that contribute to lower banana imports, especially in the European Union is the increased cost of energy to ripen bananas. According to Ecuador’s banana associations producers also need better prices to support the increased input costs, as well as to cover the more expensive shipping rates.