'In the uncertainty of life, the one thing we can be sure of is change.' That was the theme of the Cherry Associations annual general meeting, which took place on 27 July 2022 in Paarl. Hortgro Cherries chairperson, Arno Marais, said that change is not always easy, but it is the people and the businesses that view change as an opportunity and that can adapt, which stay ahead, and this is what Hortgro Cherries tries to achieve.

Cherry industry overview
Over the last five years, the area planted under cherries has increased by 77%, with 24 producers farming on 33 farm units, according to Nina Viljoen, economist at Hortgro. According to Viljoen, the area planted in the next five to six years could expand by 90% to 1035 ha.

Cherry Area Trend by Nina Viljoen, an economist at Hortgro

Cherry production areas include the Western Cape, Free State, North-West, Gauteng, Mpumalanga, and Limpopo. The Western Cape is the largest area under cherries – 66% of all plantings. Of the 66%, 84% are situated in Ceres and 16% in Worcester. A large portion of South Africa’s cherry orchards are still reasonably young, 64% are five years or younger and not in full production. 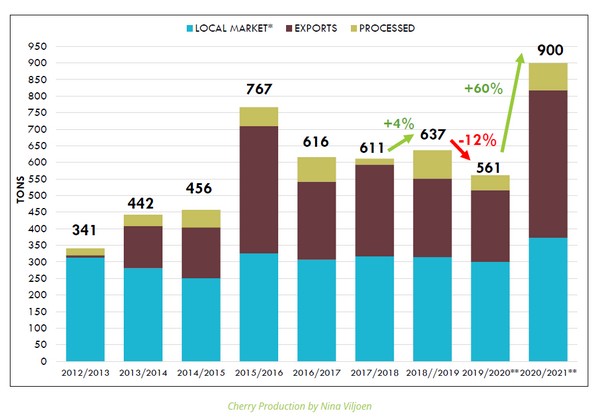 Exports
South Africa’s main export market is the United Kingdom, with very little exported also to Europe, Africa, the Middle East, the Far East, and Asia. Recently a rise in exports to the Middle East was noted. In the 2020/2021 season, 8% was exported to the Middle East, and in the 2021/2022 season, 27% was exported. South Africa exports the largest volume to the UK, whereas Chile and Argentina largely export to the Far East and Asia and the United States. In 2021/2022, Chile exported 92% to the Far East and Asia. Chile is currently the main cherry exporter of the world exporting 38%. South Africa comes in 29th, exporting only 0.1%.