The Prince Edward Island potato industry gathered for its annual awards dinner for the first time since 2020. 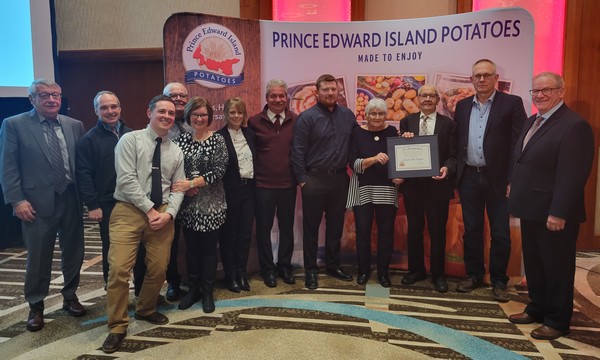 The board presented industry recognition awards to Gerald “Jeddy” MacFadyen, John Robinson and Kevin MacIsaac. MacFadyen was only 16 when his father passed away and he and his brother took over the family farm. In the early years of commercial potato production, he was one of the largest potato farmers in PEI, growing 100-175 acres. Today, MacFadyen has participated in the growing of over eighty potato crops and left a legacy for his sons and now grandsons, making MacFadyen Farms Ltd. a fourth-generation farm. Ninety-six-year-old MacFadyen was there to receive the award.

John Robinson, his father Eric and his brother Allan operated Eric C. Robinson Inc. in Albany, PEI. Robinson’s chemical engineering background enabled him to give expert advice to his customers. By 1988, John and Allan banded with six other family farms to operate Mid-Isle Farms Inc. John was involved with developing the Canadian Potato Marketing Agency to help align potato supply with demand. Mary Robinson and Adam Wight accepted the award on behalf of John. 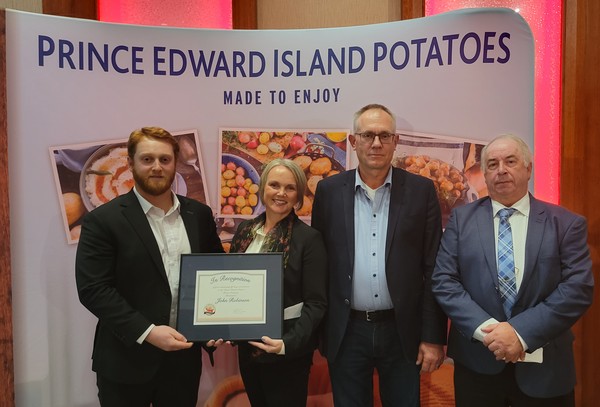 Kevin MacIsaac grew up on his family’s farm in Bear River, PEI. He spent some time as a crop specialist in NB after completing his Bachelor of Science with a focus on agriculture from the University of Guelph before returning to his family’s farm. He served in executive positions with the PEI Soil and Crop Improvement Association, the Prince Edward Island Potato Board and other organizations. He later became the general manager of the United Potato Growers of Canada (UPGC). He was with his wife Nancy to accept the award.

There was a moment taken for the 2021 recipients Peter McKenna, Charles and Wilhelmina Murphy and Morely Wood since the board could not have a banquet last year. 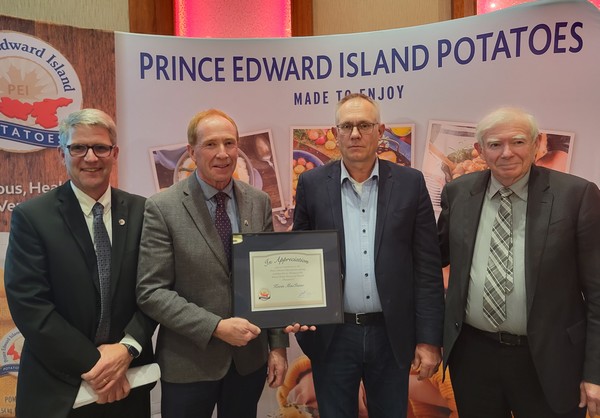 The industry acknowledged outgoing board representatives Mark MacMillan, Mary Gillis and Young Farmer Michael Ramsay for their time on the board. New board members Ian Shaw and Katie MacLennan were welcomed. Current board chair John Visser received recognition for completing his first year as chairperson and for rising to significant challenges during a difficult year.

The board of directors also offered a plaque to the PEI Potato Board staff for their work during the potato wart crisis.