The transporter's strike puts in check the transport of 25,000 tons of cherries in Chile

“The situation has become critical for our fruit exports. There are significant obstructions on Ruta 5 Sur (Route 5 South). There are transit problems in Paine, also between the area of Rosario and Rengo. However, the Port of Valparaiso is experiencing the most complicated issues, as the carriers' strike is preventing its normal operation, which directly affects the delivery of fruits shipments," stated Ivan Marambio, the President of the Association of Fruit Exporters of Chile AG (ASOEX), referring to the serious situation in the Port of Valparaiso's Logistics Support Extension Zone (LSSA), which has been blocked for the transit of fruits for export.

"Once again our fruits are paying the costs of a problem that we have not caused, but that is having negative effects on our sector. For example, the HMM Blessing container ship of the Cherry Express service is scheduled to depart tonight, but it will leave without all the cherries we planned to load in it because of the obstruction of the entry of the fruit to the facilities. This is serious. It damages Chile's image abroad as we won't be able to comply with the delivery dates we had. It also affects our buyers and consumers in the external markets that are waiting for our fruit," he said.

"Twenty-five thousand tons of cherry, equivalent to the load of two Cherry Express ships that are going to China to start the Chilean fruit season, have been compromised in these three days of strike," stated the president of the Federation of Fruit Producers of Chile (Fedefruta), Jorge Valenzuela. In the name of the whole sector, Fedefruta rejected the mobilization and supported the measures to bring normality to the situation. 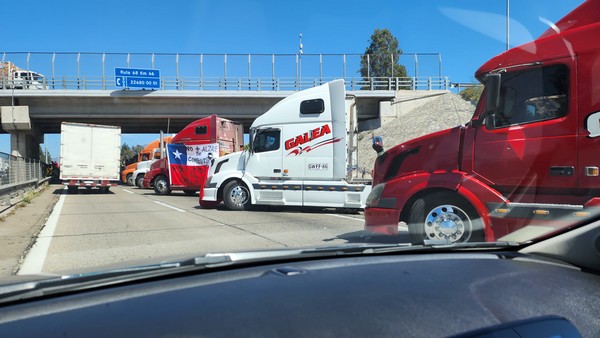 Valenzuela said that the transport of these containers has collapsed for emblematic cherry-producing areas of the Metropolitan and O’Higgins regions, such as Paine, Rengo, and San Fernando, adding extreme pressure on producers.

The president of ASOEX stressed that not solving this issue soon would have an important impact on the sector. “We officially started the 2022-2023 export season yesterday, and we did so with a lot of optimism. Today's events are cause for concern, which is why we call on the Government and the leaders of the carriers to work on an agreement that will allow Chile's roads and ports to resume their normal functioning as soon as possible. The fruit can't wait.”