Idaho is the top potato producing state in the United States. Almost one-third of the nation’s potatoes are grown in the Snake River Plain, a belt of low-lying land that extends across southern Idaho. 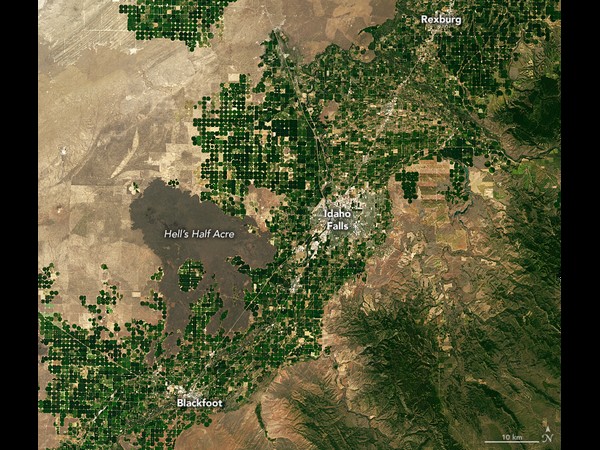 The image above, acquired on July 11, 2022, with the Operational Land Imager on Landsat 8, shows a detailed view of the farm fields around Idaho Falls.

The injection of volcanic materials makes soils in the plain especially fertile for crop production, but the area receives only about 20 to 30 centimeters (8 to 12 inches) of precipitation a year. Potatoes are especially sensitive to drought and center-pivot irrigation is supporting many of the potato fields, as indicated by the green crop circles.

Since the first Landsat satellite was launched in 1975, the Idaho Department of Water Resources has used satellite data to monitor and manage water. According to IDWR, Idaho’s 1.36 million hectares (3.4 million acres) of irrigated agriculture accounts for over 98 percent of the water used in the state.