"This year, retailers will need an extra number of producing suppliers, and our platform is the ideal place to find them"

There are more than 219,000 hectares devoted to citrus cultivation in Spain (equivalent to 313,000 soccer fields), and the number of operators ranges between the thousands and the tens of thousands, so there is a clear need for a tool to facilitate a direct connection between growers and retailers for the purchase and sale of citrus fruits, such as the Naranjasyfrutas.com platform, created by Juan José Bas.

In its ten years in operation, Naranjasyfrutas.com has positioned itself as the leading platform for the purchase and sale of crops at origin, and this season there has been a further increase in the number of users who rely on it to improve the visibility and positioning of their business. "In September, compared to the same month last year, the number of crops advertised on the website has increased by 20%, while the number of businesses registered to receive the alerts has shot up by 200%," says Juan José.

"One of the factors that explain this success, and which we have implemented this year, is the sending, both via email and WhatsApp, of detailed listings of available harvests to registered retailers at least one month before the harvest, so that they can plan the purchase and facilitate contact with producers from all over Spain." 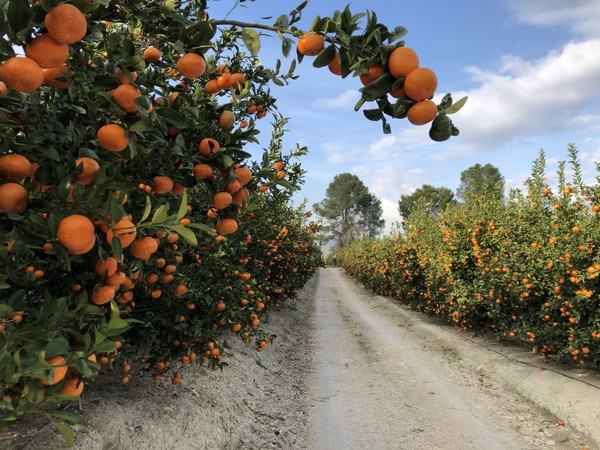 "In August we had already sent 2,268 listings via mail and 364 via WhatsApp of the harvests announced in Naranjasyfrutas.com of the first varieties of the campaign: Marisol, Clemenrubí, Okitsu and Owari."

"Through our website's statistics, we can confirm what varieties are the most sought after by registered businesses. In October, for example, the available Clemenules harvests were the most sought after, followed by the Navelinas and Oronules, and I am noticing an increase in the number of searches for Fino lemons. Therefore, we are expanding the lists that we will send to the stores registered in our platform with the available harvests not only of Fino lemons, but also of Rojo Brillante kakis and Wonderful and Mollar pomegranates."

This pioneering platform, devoted to the digitization of citrus buying and selling in Spain, is a family project that started with the goal of tackling the difficulties that existed in the making of contact between producers and buyers in the citrus sector. It has the support of trade and producers' associations, including agricultural organizations such as Asaja or La Unió de Llauradors i Ramaders, and producer associations such as Asociex, the Spanish Kaki Association, Asoproa, Apoexpa or the PGI Cítricos Valencianos.

"Until then, there was nobody connecting the producers and the wholesalers, and now we are the leading platform in Spain providing that service, also free of charge," said Juan José. "This year in particular, in which there is going to be a significant drop in the production volumes, not just for citrus, retailers will need an extra number of producing suppliers, and our platform is an ideal place to find them."

"We are making efforts to promote fruit in general on Naranjasyfrutas.com, not just citrus; but the platform is suited for any product. In fact, our goal is, step by step, to include all fruits and vegetables and become a leading platform for each of the new areas."