"Trade on the German potato market was a bit slow, but satisfactory"

Trade on the German potato market was a bit slow, but satisfactory. According to the BLE, the availability of domestic lots expanded locally. The share of new floury-cooking batches increased here and there. Supply and demand mostly matched. Prices were not always consistent, which weakened the demand somewhat, but this often remained constant. 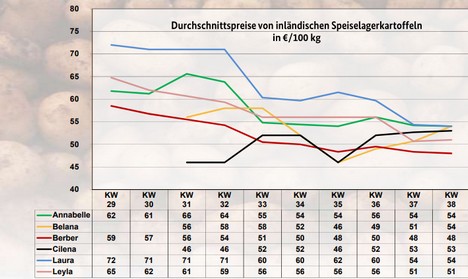 In Munich, volumes of Bavarian Sieglinde increased significantly, which weakened the demand a little. In northern Germany, crop volumes are expected to be lower than last year. In addition to this, some Belgian french fry producers will be purchasing goods in Germany at a very early stage. As a result, the industry is not expecting prices to drop in the nearby future, but rather to rise.

Rhineland-Palatinate: Low regional harvest
The consequences of the climate crisis are leading to a smaller potato harvest in the north of Rhineland-Palatinate as well. The cool nights favor storage, and grubbing operations are only occasionally hindered by damp weather, the Chamber of Agriculture claims. The risk of progressive damage from wireworm is keeping harvesting operations running at full speed. Food retailers have started promotions for larger containers, with initial feedback indicating above-average interest. Prices remain firm, and where there is a shortage of goods, it is possible to make up for it on a supraregional basis. 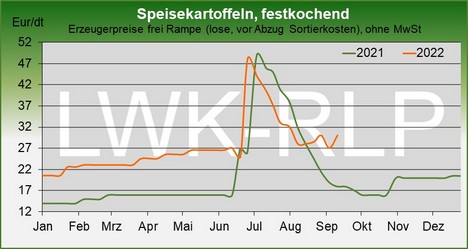 Hesse: Unchanged price situation, steady demand
Prices on the Hessian potato market remain unchanged from the previous week, reports the Chamber of Agriculture. Within food retail, sales promotions are repeatedly running at prices of 0.50 to 0.60 EUR/kg in a 10 kg sack. Overall, demand can be met comfortably if it remains at a normal level. There is a sufficient supply from the main harvest now, in some cases of varying quality. Individual lots are suffering from quite high grading. However, large-caliber goods in particular could be in high demand in the coming weeks. Regional precipitation is easing the pressure on grubbing operations.

Lower Saxony: Sluggish clearing, constant demand
Harvesting in the northern German potato stronghold of Lower Saxony progressed only slowly, due to heavy rains. Demand remained constant during this time, and in addition, demand from buying regions started to increase, BVNON says in its latest market report.

Schleswig-Holstein: Main part of the harvest in storage
The local potato market continues to be all about storage. Fewer potatoes are available on the open market, and growers are storing the bulk of their crop. Demand is estimated to be greater than supply. The price is increasing compared to the previous week. The price levels are too high for export inquiries, so no business is being done there. Volumes are lacking in southern Germany. Here, too, the focus of negotiations is on transportability. As far a quality problems go, scab is being reported here and there. However, the majority of the crop can be stored without any foreseeable problems, according to the Schleswig-Holstein Chamber of Agriculture.