The marketing of Spanish dried garlic is rapidly picking up speed. Meanwhile, batches from France, China, the Netherlands as well as from Germany are hitting the market. Jörg Sturmberg, garlic specialist and managing director of JERSA Fruchtimport in Bergisch Gladbach, talks about the current situation and longer-term developments in the garlic market.

Jörg Sturmberg is founder and managing director of Jersa Fruchtimport Ltd. Spanish garlic from the company's own contract sources is traded on the German market under its own label: OSVI.

For the Spanish garlic currently being shipped, prices have remained almost the same compared to last year, although a price increase would have been necessary, according to Sturmberg. "The additional costs, for example in storage and logistics, are already considerable. If this continues, we will eventually feel the consequences, with livelihoods being at stake near the source."

The current situation is particularly close to the experienced garlic merchant's heart, as he has been working closely with many companies for more than three decades. "Back in 1986, the motive was to market Spanish garlic in Germany. Unfortunately, the great leaps we made at the time no longer existed in recent years. Quite the opposite: a lot had to be sorted out in recent years in order to meet quality requirements." 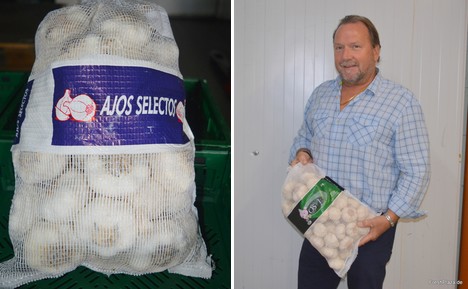 Harvest losses in Spain and France
According to Sturmberg, this year would show a challenging marketing season as well. "At the beginning, it rained too much in Spain, and at the end it was too hot, which all effected the plants. These weather conditions have generally resulted in smaller calibers and yields per hectare, as well as quality deficiencies. For medium calibers 50-60, which are needed for the standard 200 gr nets in your grocery store, there is enough to meet the demand. In the case of larger products (60-70-80-90) for wholesalers and specialist retailers, on the other hand, we have only limited quantities available. In this segment in particular, there are no reasonable alternatives to Spanish sources that we could fall back on," Sturmberg describes. 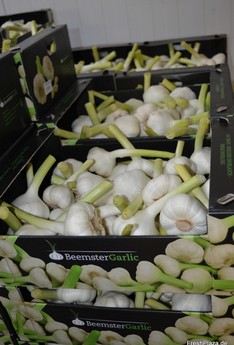 It is not just Spain that is struggling with significant crop losses, but France as well, Sturmberg continues. "Regarding pink garlic from the l'Autrec area, we're almost through with those volumes. This high-quality product is traditionally particularly high-priced, which is why it is only exported in manageable volumes. But this year, they are not even able to meet this demand."

In recent years, there have been certain changes in the selection of varieties, Sturmberg adds. "Spring varieties are increasingly coming to the forefront, because they are higher yielding and more resistant compared to the tried-and-true white garlic. This shift in variety selection has been seen in Argentina in particular."

Sourcing Chinese product remains difficult
As a specialized garlic importer, Sturmberg also sources a significant portion of its volumes from China, the world's most important growing country. "Despite Corona, availability was continuous for solo garlic, with steady sales. Nonetheless, we also faced some shipping issues, such as delivery delays and sometimes four-to five-fold freight rates." 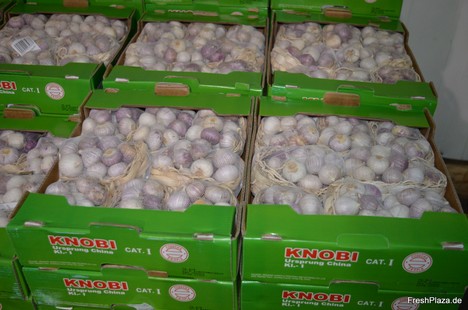 Chinese solo garlic is traded under the Knobi private label.

Domestic garlic gains market share
In the shadow of the major growing countries, domestic garlic production is gradually gaining ground as well. "We work closely with several German growers, also promoting them. For many years now, we have been sourcing fresh green garlic from the Netherlands from June to August. In recent years, however, we have tended to be able to rely more on German garlic. The weather situation in the last two years has also been favorable for domestic producers and comparatively more optimal than in Spain. We have also noticed that retailers are keen to offer German products. Among consumers, fresh garlic, not just from Germany itself, has noticeably gained popularity in the last decade."