US to import more vegetables in first half of 2022 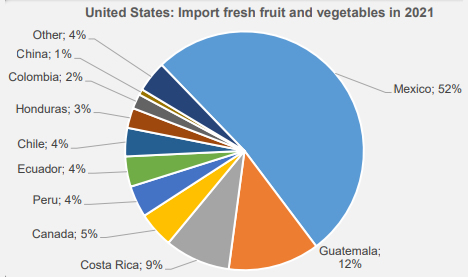 Increasing amounts from Peru; recovery in imports from Chile
Peru and Chile are respectively the 5th and 7th supplier of fresh fruit and vegetables to the United States. Imports from Peru continue to grow. This year in the first half the amount was 18% more than last year and will exceed the 1 million tonne mark on an annual basis. Grapes and onions are the main products imported from Peru. Blueberries take third place. Last year, for the first time, they exceeded 100,000 tonnes. Asparagus, avocados, bananas and mandarins are the other main imports from Peru. Imports from Chile seemed to have passed their peak, but in the first half of this year they still grew by more than 10%. Grapes are by far the most important product. Until a few years ago, some 20,000 tonnes of peppers were imported from the Netherlands, but last year that was only 1,400 tonnes. Onions (6,100 tonnes) and beetroot (5,300 tonnes) were more important last year.

Less export; large amount of sweet potatoes to the Netherlands
The United States is also a major exporter. Annually it exports about 6 million tonnes. The export is decreasing and mainly the export of home grown products. The re-export was increasing, but stagnated in the first half of the year. The re-export mainly concerns bananas to Canada. Canada is also by far the most important customer for the export of home-grown products in the United States. Mexico is number two and far behind Korea, Japan, Taiwan and Hong Kong. The Netherlands and the United Kingdom follow. This mainly concerns sweet potatoes.