First Chilean Pazazz apples to arrive in U.S. in June

Supplies of Pazazz apples are good despite the challenging growing season North America experienced this year.

Honeybear Brands® of Elgin, MN has production zones of the managed variety Pazazz across North America including Washington, Minnesota, Wisconsin, New York and Nova Scotia. “We grow Pazazz in multiple growing regions to supply key regional retailers with product grown closer to home. And the majority of the volume comes out of Washington to help support the national retail programs we have,” says Don Roper, vice-president sales and marketing, Honeybear Brands.

For the first time, later this year Honeybear will bring imported Pazazz apples to the U.S and other locations via long time growing and export partner, Frusan® in Chile. “We’ve always had a very strong Chilean production program that allows us to execute our dual hemisphere supply assurance strategy,” says Roper. “Our biggest crop out of Chile is Honeycrisp which was planted nearly 20 years ago. We implemented the same model for Pazazz planting orchards seven years ago with the same intention of providing year-round supplies of Pazazz to our key retail partners.”

Large import crop
Unlike Honeycrisp, a variety that’s harvested earlier in the domestic apple season, Pazazz is a late-season variety which means imports will begin in June, overlapping slightly with domestic supplies. “In general, there will be a large import crop of apples coming into the U.S. because we have a down production year on most key varieties, conventional and organic,” says Roper. “We’ll add incremental production increases on the Chilean Pazazz crop in the coming years to match supply with demand. Our Chilean partners are also beginning to explore exporting Pazazz to other markets such as Europe and China.” 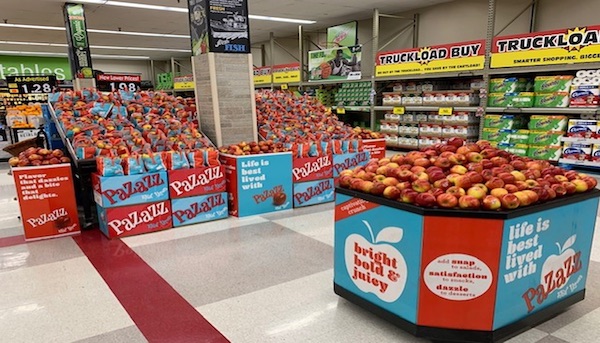 This year domestic supplies of Pazazz are similar to last year’s volumes. “Washington overall is down slightly but other growing regions are on par with last year. Next year we hope to gain that production back as we have the trees in the ground to add more tonnage. But this definitely was a tough growing year,” says Roper.

That said, Honeybear is coming into a time when it will launch promotions around Pazazz. “The flavor profile of Pazazz is going to be at its peak from late-January through the spring. When Pazazz is harvested, it has a little more starch in it and less of the sugars. But as the starches convert to sugars in storage, an exceptionally good high-flavored apple is produced. And because of its exceptional texture, this late-season apple also provides a popping, fresh crunch along with great flavors,” says Roper. 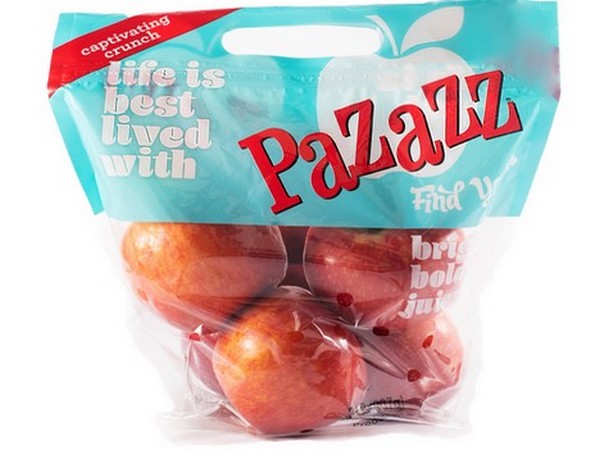 “It takes some time to change behaviour and get people to try new products. There’s been an explosion of new varieties so now the challenge is to get people to try that variety,” says Roper. “The pandemic slowed the trial and adoption of new varieties. People went and bought what they knew and were less likely to experiment with new things.” However, given that grocery stores were the only settings people could get to during lock downs throughout North America, a significant amount of product was moved. “As marketers now emerging from that, we’re looking at how we effectively gain trial and adoption,” says Roper.

As for pricing, Roper notes that overall FOBs are up compared to last year reflecting the smaller national crop.