The grapefruit market is currently in a transition between the northern and southern hemispheres. The Spanish season is coming to an end, as are the Turkish and Israeli campaigns. The demand has been good in many European countries, but many are also feeling the impact of the pandemic on this product. In the southern hemisphere, in South Africa, the harvest has already started. There is a good amount of fruit on the trees and the volume is expected to be larger than last season. 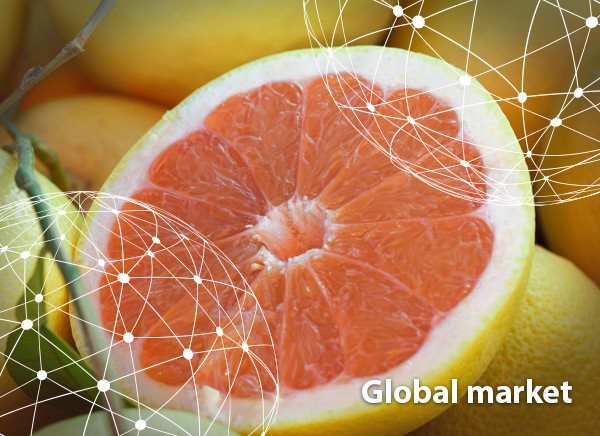 The Netherlands: Good grapefruit season
According to a Dutch citrus importer, the demand for grapefruit has been particularly good all season. "Due to the coronavirus, the demand for shelf life in general and for citrus in particular is very good. The Turkish and Spanish seasons are about to finish, which is favorable for the tail end of the Israeli season. The South African grapefruit is delayed and that only gives more opportunities to the Israeli production, which we do supply until the end of April. Prices currently stand at around 16.50-17 Euro.

Belgium: Market awaits arrival of South African grapefruit
The demand for grapefruit has not been exceptionally good recently. A Belgian importer says that the quality of the fruit from Turkey and Spain has deteriorated somewhat. "The frost in Spain has not done the quality any good." From week 17, the first South African grapefruits are expected and the trader is hoping for another good season, like last year's.

Germany: Pomelo replaces grapefruit
In the German trade, the Spanish Star Ruby dominates the market. There are also smaller volumes from Turkey and the United States (Florida). The latter origin currently plays a marginal role due to high duties and trade prices.

Across the board, grapefruit consumption in Germany seems to be gradually declining. "Grapefruits still play only a limited role in the citrus trade and are increasingly losing out to trendier products, including pomelos, but also to modern, innovative orange varieties," says one trader.

The South African season is about to start. The grapefruits from this new campaign will start arriving in April and take over shelf space from the older European fruit, as usual.

Italy: Grapefruit popular with retailers
Due to the closure of the catering channel, grapefruit is going through some difficult times. Wholesale prices on the market in Bologna fluctuate between 1.00 and 1.30 Euro/kg, depending on quality and origin. Spanish and Israeli grapefruits are more expensive than those from Cyprus. In general, grapefruit is more popular with retailers. It had also been growing in the catering channel until recently, but the pandemic has caused orders to drop.

The grapefruits now on the market come mainly from Spain, Israel, Turkey, Cyprus, and Florida. Sicily also has some small production areas. In recent years, more fruit from Turkey and Cyprus has been available in Italian markets. In the summer, it is imported from South Africa and Florida, even though the American grapefruit sometimes has some skin defects. In recent years, pink grapefruit has grown tremendously compared to the traditional varieties.

In Sicily, the grapefruit production season has been stable. The production period is quite long and in the southeastern part of Sicily, the marketing can start earlier, compared to other production areas. Here the fruits are harvested perfectly ripe as early as mid-October and the product remains available until March/April. A trader tells us that the Star Ruby red grapefruit has an average price of 1.00 euro/kg, with fluctuations of 20-25% (up and down) between the beginning and the end of the season.

Spain: Grapefruit harvest finished within a month
The grapefruit harvest in Spain is expected to end between mid and late April. As has been the case with other citrus fruits, the demand is low, as the product strongly relies on the hospitality industry. Grapefruit is a product that is widely consumed in juices, school canteens and hotel breakfasts. Since the outbreak of the pandemic, consumption has been greatly reduced. In supermarkets, however, sales are going more smoothly. Prices at origin have remained relatively acceptable, averaging between 0.25 and 0.28 Euro per kilo, with some outliers. However, this year's crop is between 10 and 15 percent smaller.

The supply of European grapefruits is declining. Spain will finish the harvest in about a month and Turkey and Egypt are expected to finish even sooner. Exporters believe they will be increasingly alone in the European markets for the rest of the Spanish season as the volumes from other countries in the northern hemisphere become scarcer. Also, when spring arrives, the good weather will again stimulate sales.

Regarding Florida and Texas grapefruits, after the change of the presidency in the US, the 25% increase in tariffs was lifted; however, this decision came too late in the campaign to make a significant difference in either market.

Israel: Demand for grapefruit skyrocketing
Israel's grapefruit exports were very good this season. The country shipped a lot of fruit to China, mainly Sunrise (Star Ruby) Red-grapefruits and also Sweetie Green-grapefruits. The season in Israel is now coming to an end, causing the demand to skyrocket, as there is a shortage in the market and the grapefruits that are still available have large sizes, while China prefers smaller sizes. Volumes are similar to last season's, although they were somewhat low at the beginning of the campaign due to the coronavirus.

United States: Strong demand for grapefruit
Florida increased its citrus acreage by 600 hectares last year. This season, the grapefruit production has doubled, and it is expected to double again next year. The demand for grapefruit, meanwhile, remains steady. "The demand has gone up a little bit since the frost in Texas, but we haven't seen a huge increase," says a trader. Growers are waiting for next season to determine the actual impact of the frost. Prices are similar to last year's.

A trader says that on the West Coast, the supply of grapefruit from California is declining. "Texas finished earlier, thereby creating more demand. Some regions in California are getting ready for that." Other major shippers getting fruit from Southern California started about a month ago and will continue until August-September. The trader also says that the demand is stronger this season and prices are rising.

According to the trader, the pressure on California's production may also create opportunities for Mexico. "Mexico has just finished shipping from one of its producing regions, but they will probably start again in May."

South Africa: Larger volume than last year expected
"The harvest has started and the fruit's color looks very nice," says one exporter. "There is some nice fruit on the trees." The volume is expected to be a lot greater compared to last season. The weather conditions between the blossom period and the fruit setting were ideal; mild, with occasional rain showers.

Some of the major grapefruit production areas have had dry weather, but last summer's rain did well for the water supply. Sizes will range between 40 and 50.

China: Grapefruit supply very limited
Last year, the market conditions for imported grapefruit were very poor. Many importers lost money, so companies are not importing much this year. As a result, the volumes now available are quite low. Currently, the products available on the market come mainly from Egypt and Israel. The share of Spanish grapefruit is very limited.

Grapefruit prices are surprisingly high this year. The price of the Egyptian Star Ruby amounts to around 330-370 yuan/5 kg. The Egyptian grapefruit season is almost over, but there are still products on the market; however, the quality is declining a bit.