‘Compared to the Covington, the Beauregard is no Heidi Klum’

There she is: the sweet potato. For some years, the tubers have appeared more and more frequently in the fruit and vegetable departments of German supermarkets. In other European countries such as the United Kingdom and the Netherlands, the sweet potato already has a significantly bigger share. But in this country too, it is conquering our kitchen more and more frequently and with ever growing popularity. "We have an exciting mission and are looking forward to the future," said Joseph Renz, European representative of Scott Farms International, one of North Carolina's largest sweet potato farms.

“Right now we are at the beginning of the season,” said Renz. “As we speak, supermarkets are filling their displays with a fresh harvest of sweet tubers from overseas. Nevertheless, it is important to promote this healthy product beyond Christmas and to promote it even better to the customer.” This way, this culinary rediscovery will have its place on German plates indefinitely. It worked in Great Britain. The product is not one of the classic vegetables. In the run-up to Christmas and also for Christmas itself, it is the perfect side dish for roasts or poultry.

Giant production area
The Scott Farms’ plantation covers a vast area, producing 74,000 tonnes per season. The harvest in late summer is done almost entirely by hand. Only a tractor with an inclined bucket is used to entice the sensitive tubers to the surface. Then 'picking by hand' begins. Since the fresh sweet potatoes still have a very thin skin, they are now collected by hand. This is followed by the so-called 'curing', which gives the skin a certain stability. Curing describes the natural storage process in which the skin gets time to 'recover' and to strengthen. Only then optimal shipment conditions are reached.

“Very large qualitative differences can now be found,” says Renz. “In addition to the orange-yellow Covington variety, we also cultivate the Nash (purple flesh), Bonita (white flesh) and Murasaki (red skin, white flesh). By far the best known variety is the orange-fleshed Covington. The cultivar Beaurregard, cultivated mainly in Spain, is certainly no ‘Heidi Klum’ due to its natural deformations and furrows.”

On top of that, European sweet potatoes are not refined by the process of curing; they are put into the market relatively soon after harvesting. This can lead to quality losses and a shorter shelf life. "The price of the Beauregard is therefore also slightly lower: 5 to 6 euros per 6 kg compared to 6 to 7 euros per 6 kg for Covington, in wholesale. 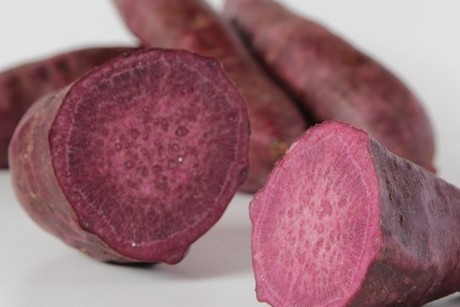 Versatility
Despite its rising popularity, German customers are still relatively hesitant as regards the sweet potato. Many do not know that you can use this versatile potato for numerous purposes. In addition to the domestic processing into fries, Nudeln or puree, you can use these potatoes elsewhere as well. Refining salads, it can also be consumed raw. Renz: “Because of this versatility you can also find more and more articles as a commodity or as a gluten substitute. By the way, their kinship to local potatoes is just skin deep. Except for the name, the two have nothing in common.”