"The biggest problem is the saturation of the lime market"

One of the largest markets for Persian limes in Mexico is the United States, where there is a large Hispanic population, but the excess supply of a mix of limes of good and poor quality can have a negative effect on producers, exporters and importers.
"According to official statistics, the acreage devoted to limes by 2014 in the eastern states of Mexico accounted for 9.75% of the total area. Over the last five years, this has led to a significant increase in the number of trucks crossing through Otay Mesa and Nogales to the United States," affirms José Manuel Álvarez, of Calvera Inc. (USA) and Cítricos Cadillo (Mexico). 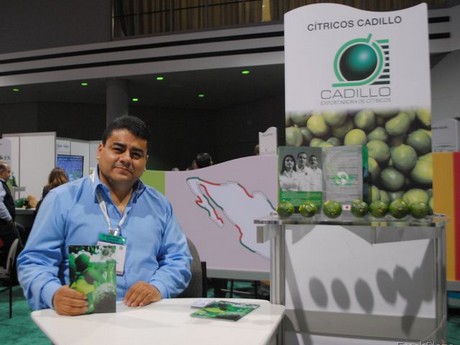 17% of the population is Latino
Álvarez adds that exporters from each Mexican coastal area usually export to the same coast of the United States for logistical and competitiveness reasons. Latin Americans, who are the largest consumers of limes, represent 17% of the United States population, with 64% of them being of Mexican origin. The Latin American population is divided evenly between both coasts, although two-thirds of Mexicans concentrate on the west coast, and each of them consumes, on average, about 14 kilos of limes a year, while the average global consumption stands below 2 kilos.
To supply this huge market, the total volume of limes grown in Mexico has increased by 37% between 2010 and 2015, while exports have grown by 46% and their monetary value has become 61% higher. According to Álvarez, "these figures have attracted the attention of Mexican and US investors, which is why the number of trucks that cross the border each week has increased from 386 in 2010 to 493 in 2015, which is a 27% increase."
Market saturation
However, the consultant affirms that problems for the market occur when prices rise: exporters tend to ship many more limes to the United States in a short period of time (more than 700 trucks have been shipped in one week), which results in market saturation. Furthermore, these shipments contain limes of many different qualities which are all are sold at the same time. The first shipments that arrive generate profits thanks to their high prices, but all the surplus is sold at very low prices during the next two or three weeks, which has a negative impact on the market. "In the end, nobody wins, because the market receives an inconsistent quality and the exporters and importers lose money," explains Álvarez, who believes that companies in the lime sector should become organised, as other sectors, like avocados, have already done. It would be the best way to prevent this supersaturation and the damage it causes. "Let us remember that the largest market for limes in the United States are Latinos; a population whose growth in this country is expected to grow at a slower pace over the next few years," he adds.
Guadalupe-Reyes
As for the near future, Álvarez points out that market behaviour is difficult to predict, and that December is a month with many celebrations in Mexico (a period known as Guadalupe-Reyes, which lasts from 12 December to 6 January), which could lead to a slight shortage of the product, although producers and packers do not expect prices to increase in the short term because there is enough fruit in the orchards. "Based on my consultation with producers and packers in Mexico and intermediaries in the United States, we could expect steady prices during the first two weeks of December, and perhaps a rise in prices during the third week," concludes the entrepreneur.
Fifteen years of experience
José Manuel Álvarez is an Administrative Consultant at Calvera Inc., in the US, and Director of Global Marketing at Cítricos Cadillo SA de CV in Mexico. He has 15 years of experience in the lime market and has business relations with producers, packers, wholesalers, distributors and supermarkets in Mexico, the United States, Canada, the European Union, South Korea, Singapore and Japan. He holds a bachelor's degree in Business Administration and a Master's Degree in Corporate Law and International Commerce. He has been an external consultant and instructor for the Mexican government agencies promoting foreign trade ProMéxico and Bancomext.
More information:
José Manuel Álvarez
Cítricos Cadillo SA de CV
Martínez de la Torre, Veracruz, Mexico
T: +52 232 373 1153
E: sales.ventas@citricoscadillo.com.mx
www.citricoscadillo.com