After a good grape season in 2015/2016, the next European season, 2016/2017 expects a slight decrease of 3.5 percent. This means a total production of an approximate 1.7 million tons. This volume makes Europe one of the world leaders in terms of grape production, so writes USDA in a recent report.
Italy, Greece, and Spain together, account for 93% of the European production. In several countries, some decreases have been expected. Bulgaria may loose 17.4 percent in volume, Greece 6.9 percent. France (-6.7%) and Italy (-4.3%) also do not come near last year’s volume. After a dramatic decrease during the past ten years, the acreage in the 28 member states of the European Union keeps decreasing. An important factor is the increasing production costs and strong competition from other countries. 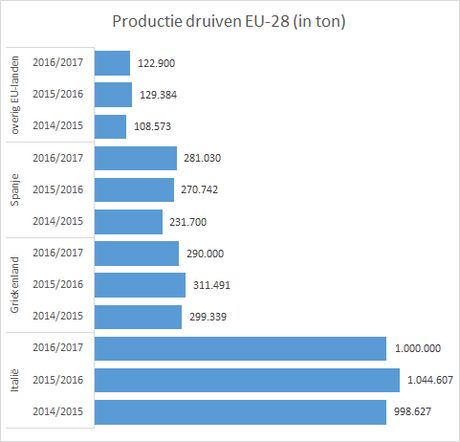 Italy is the undisputed market leader within the EU. Due to the bad weather conditions, the harvest has decreased with 4.3% to 1 million tonnes. The production mainly takes place in Southern Italy, concentrated in Puglia and Sicily. These areas account for 70 percent and 25 percent respectively for the national production. Three varieties, Italia, Victoria, and Red Globe, account for 66 percent of the total acreage. In the past few years, Italian producers have switched to seedless grape varieties. The demand for seedless grapes has increased swiftly within and outside the EU. The Sugraone and Crimson are the most cultivated seedless grapes, followed by the Thompson and Sublime. Despite this positive trend, the acreage is under constant pressure.
Greece has calculated its loss this year to a 6.9 percent decrease in volume relative to the previous season, according to the estimates from the sector. This is around 290,000 ton. The hot and dry weather during the summer in Crete and the heavy rainfall in Corinth are mostly yo blame for the decreasing volumes. Greece has a total of 17,300 hectares for grape cultivation. The most important production areas are found in Corinth, Kavala, and Heraklion. The most produced varieties are the Sultana (Thompson Seedless) and Victoria. The Greek sector is investing in an expansion of the season over October and November. 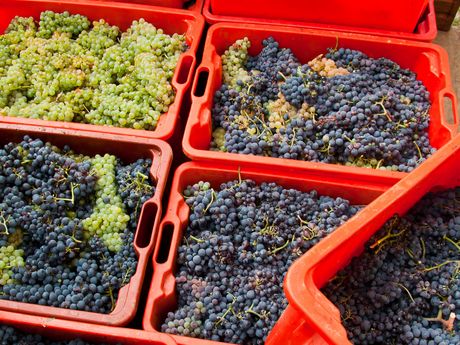 More Spanish grapes
Opposite to the other two countries in the top three, Spain has calculated a larger volume. The sector estimates a growth of 3.8 percent. Spain has a total of 14,000 hectares for grape cultivation. The major part is found in Murcia, Valencia, and Andalusia. Murcia and Alicante account for 70 percent of the local production. In total, about 50 different varieties are produced in Spain. The Aledo, Ideal, Muscatel, Dominga, and Napoleon, are the most important varieties. The seedless varieties have a share of 30 percent in the cultivation. This production is mainly found in Murcia.
The EU is a net importer of grapes. Last season, 28 countries imported more than 600,000 tons grapes. South Africa is the most important supplier, with almost 200,000 ton. The second place is for Chile, which shipped more than 100,000 ton to Europe. Other large suppliers are India (77,019 ton), Peru (63,880 ton), Egypt (54,946 ton), Brazil (23,813 ton), Turkey (24,326 ton, and Namibia (18,041 ton). The largest importers on the European continent are the Netherlands, Germany, and the United Kingdom. From the Netherlands, the grapes are spread all over Europe. In terms of export, the major part of the grapes remains within the borders of the EU. Switzerland and Norway are important export destinations outside the EU. In addition, there are opportunities in Africa, Asia, and the Middle East.