Since June 2014 we have been sharing updates from Geert Leffers, the Dutchman who is building a large glasshouse project in Daxing, China. After a few setbacks, the first phase of Geert's project is taking shape; the first crops for the 5 hectare greenhouse are scheduled to be planted in March 2016.

The construction of the first phase with a high end Venlo greenhouse at the New Zealand Agriculture Park in Daxing, Beijing started with a few interruptions for Leffers and his Chinese crew. "Now that the problems with the investors are solved we can continue the construction. The greenhouse itself is finished; we are currently working hard to complete the boiler room with local welders; the boilers from TK Topboiler have been installed, it's now a matter of completing the connections to the heat distribution network." 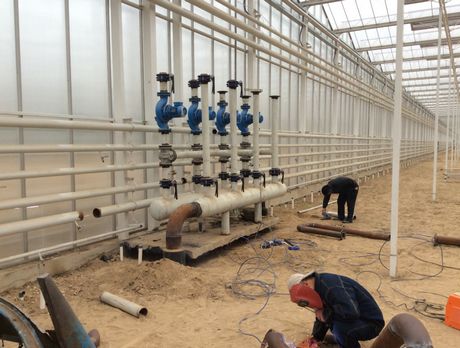 The entire greenhouse structure is built by Leffers and his building crew themselves. Most of the material comes from China. Inside the greenhouse everything is almost done; the heating pipes have all been welded and are ready to be placed. "We only need to complete the electric wiring. As soon as we have completed the final levelling of the floor we can bring in the double screen installations. The CO2 and irrigation is all done. A crew from JB Hydroponics will soon bring in their machines to manufacture and install the metal gutter canals. Furthermore, we are waiting for the other materials that need to be shipped from Holland; harvesting and pipe rail trolleys, UV-disinfection units, the high pressure fog system, water storage silos etcetera."

The snow load on the structure 2-3 weeks ago.

In January, Leffers will finally be able to start heating the greenhouse. "That will be about time, because we have already had a severe snow load on the structure a couple of weeks ago. That was a bit scary, because we did not know if our structure could withstand the large snow load. But it did withstand it, only one large window pane broke! Nonetheless, it's time that we heated the greenhouse before it starts snowing again." 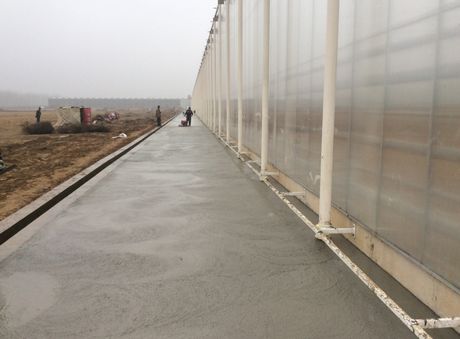 The greenhouse is also equipped with a neat guiding rail system for a roofwasher. Something that might be handy in the smoggy area of Beijing.

This week Leffers will be in Holland for three days to sign an agreement with a fresh produce trader. "We have received great interest in the tomatoes that we are about to produce. Dutch trader Levarht will become our partner in regards to the marketing of the tomatoes in China. The Chinese retailer Metro has already showed interest in buying our entire production. As well as this, McDonald's want to start a trial with beefsteak tomatoes. The demand is larger than we can produce at the moment!"

When Leffers plants in March, a quarter of his greenhouse will be dedicated to the production of tomatoes on the vine. Another quarter will be used for beefsteak crops. "Another quarter will be used to grow Tastery from Rijk Zwaan, a variety that I have good experience with in China already. As well as this we will grow some cherries on the vine on the rest of the acreage."

We will keep you posted about Geert Leffers' developments.