Touring the most advanced side of Dutch horticulture

If you would like to know more about the latest advanced innovations in Dutch greenhouse technology and marketing, you might want to join the second edition of the HortiDaily High Tech Greenhouse Tour in February 2016!

On Tuesday 16 and Wednesday 17 February we will once again organize this excursion to showcase the most present-day developments in Dutch horticulture. The tour will again take place simultaneously with the Horticulture Business Days; a visit to this large horticulture trade show will round off the two day tour.

During the tour, visits to the following businesses are planned:

-Greenpack, Maasdijk: Owned by six of the largest Dutch greenhouse vegetable growers, Greenpack is one of the largest packing distribution centers for fresh produce in Western Europe. Many European growers, retailers, importers and exporters rely on Greenpack's services every day. A large amount of present day automation and sorting and packaging equipment is used at Greenpak 24 hours a day, seven days a week, to prepare freshly harvested products for fast shipment to the end user. Also the integration of extensive ICT inside the streamlined organization, make Greenpack a must visit for anyone in the global fresh produce industry.

-Red Star's Fudinto, Dinteloord: With an acreage of nearly 70 hectares, RedStar is one of the largest tomato growers in Holland. Their 10 hectare KUBO built Ultra-Clima® Semi-Closed Greenhouse in Dinteloord, was the first and still is the only Ultra-Clima greenhouse in the Netherlands. The patented technology, designed by leading Canadian tomato grower Casey Houweling, enhances a higher CO2 level with a higher yield and 40% less energy input as a result.

- GrowWise City Farming Research Center, Eindhoven: Being one of the world’s largest research facilities for indoor agriculture, Philips' GrowWise City Farming Research Center concentrates its research to optimize growth recipes for the cultivation of leafy vegetables, strawberries and herbs without daylight. Other areas of research are finding ways to grow more carbohydrate-rich crops, like wheat and potatoes indoors. The center features four-layered mechanized planting racks in each of its eight climate rooms resulting in a total growing surface of 234 m2.

- Kwekerij Wim Peters, Someren: Tomato grower Wim Peters in Someren was one of the early adopters to install hybrid supplemental lighting on a large commercial scale. On a total acreage of nearly 7 hectares, Peters is growing tomatoes year round with the help of LED interlighting and SON-T toplighting. As this is one of the few companies that is growing in this setting on such a large scale, Peters is the grower to speak with if you want to hear a realistic user experience on the use of LEDs in commercial vegetable production.

- Koppert Cress, Monster: Often described as one of the most remarkable operations of the Westland area. Where else in the world will you find a grower that cultivates a unique and wide range of tastes, utilizes advanced and efficient production technologies, and founded its own culinary TV channel besides all that? Combine all of this with one of the most colourful growers of the Netherlands, Rob Baan, and it's no surprise that the company's fame has crossed many borders. This visit will be your first Cressperience!

- Horti Science Park, Bleiswijk: The Horti Science Park is the site where GreenQ - DLV Plant and Wageningen UR Greenhouse Horticulture have teamed up for research and development of advanced greenhouse horticulture and training. During our visit we will have a look at several trials at the GreenQ Improvement Centre. As well as this, the program will allow discussion on actual topics such as energy efficient growing within The New Cultivation.

- Horticulture Business Days: With more than 500 exhibitors, this is the largest trade show for horticulture in Holland. Annually organized at the Evenemental in Gorinchem, the show provides the opportunity to learn more about the latest technology and supplies, while you are networking in an informal setting. 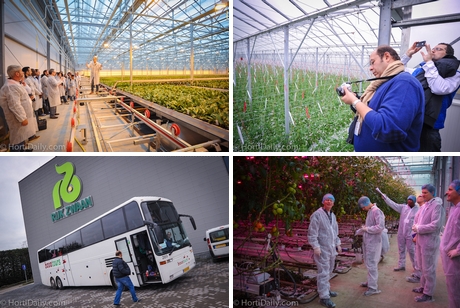 Are you a greenhouse grower or do you own or work for a greenhouse operation that is active outside of Holland, and would you like to be inspired and learn more about the current innovations and technologies that are carried out on a commercial scale by Dutch growers and the fresh produce industry? Then you are qualified to join this two day tour, free of charge!* We only ask you to submit to us a brief description of your greenhouse operation. Please note that suppliers of technology, consultants and others are not allowed to join this tour.

To register for a seat in the bus, please e-mail us a brief description of your greenhouse operation which we will review, plus complete contact details and company information, and we will reserve a seat for you.

*Travel expenses and hotel costs are not covered by the organizer. More details on suggested lodging will be provided as soon as the final program is completed.

The 2016 HortiDaily High Tech Greenhouse tour is made possible thanks to the generous help of our sponsors: 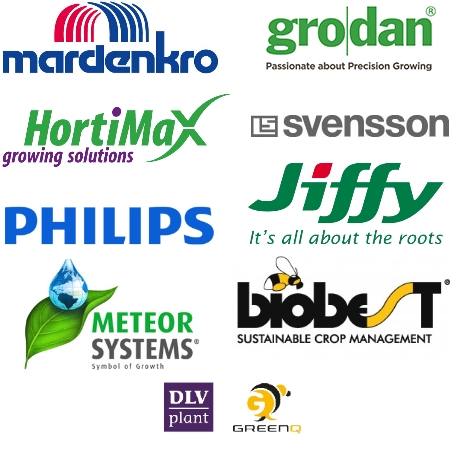