On October 1st in Rotterdam Queen Maxima opened the first covered fresh market hall in the Netherlands. It was bustling with activity both inside and outside the building. Maxima was welcomed by all who were present with the song 'Dit kan alleen in Rotterdam.' 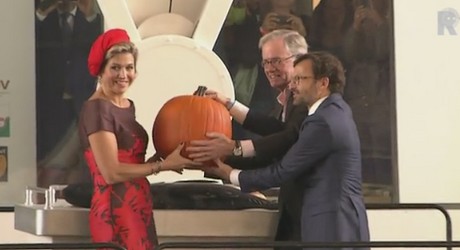 Various performances made for a wonderful opening of the new taste sensation in Rotterdam. One of the unique things about the hall is the combination of market life and living space. Mayor Aboutaleb was also present and he said that this market hall is very special for Rotterdam. "I often come to the market when doing my grocery shopping. The Mayor of Rotterdam had to be seen at this market," he said. 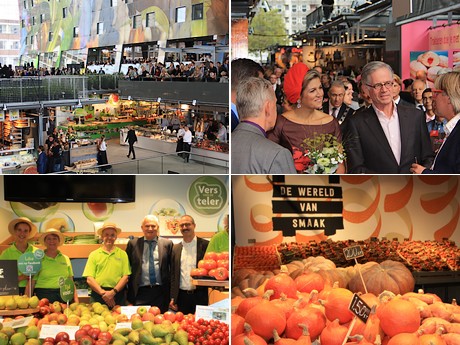 Plenty of fruit and vegetables available

Eye-catcher
The market hall was designed by architect Winy Maas and developed by Provast. This is the first covered fresh market hall in the Netherlands, and it's inspiration comes from fresh markets in other cities such as Stockholm, Barcelona and Valencia. "It all began ten years ago, when people began paying more attention to fresh and healthy food. Technically it is not a hall, it is a 'street'. Public, so that means it is open for everyone." says architect Winy. 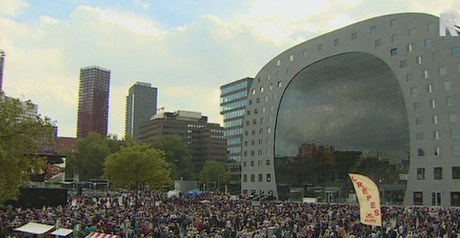 
The market hall cost approximately 175 million euros. During the opening the emphasis was mainly on the presentation of fresh products that are present in many different ways. The market hall, which is in the form of an arc and holds 228 apartments above it, is an important eye-catcher for Rotterdam. 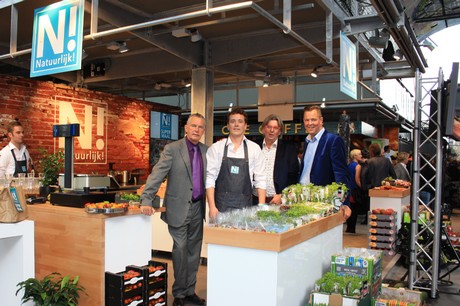 A trip of Discovery
Food lovers can indulge themselves at many different exhibits. Throughout the whole hall there are many different wonderful smells, from freshly roasted nuts to artisan bread. In the market hall you can make a trip of discovery through different cultures and tastes. This is a market that makes grocery shopping an experience, you can take your time and stop for drinks or a snack while doing your shopping. There are now more than 90 stalls filled with a wide variety of products from all over the world. Meat, fish, cheese, fruits and vegetables, bread and pastries and all sorts of exotic treats. Traders are very excited about the concept and they are eager to present, cook and sell their products. 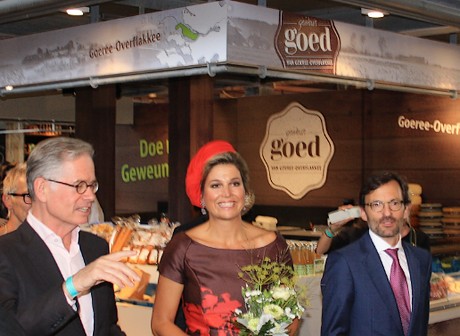 
Mix of cheap and expensive
The market was open to the public at 4:30. Rotterdammers crowded into the hall and had an enthusiastic reaction to the stunning building and wide array of products." 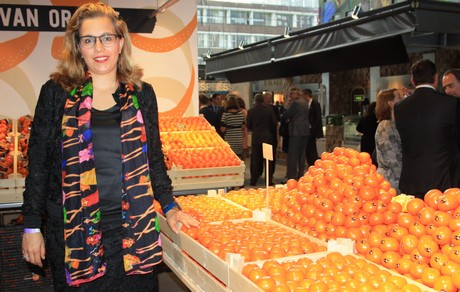 The 'Wereld van de Smaak' (World of Taste) is a concept from Ad Berends that was specially created with consumers in mind, to inspire and to transparently inform them about food in general, and fruits and vegetables specifically. The 'Wereld van de Smaak' has three locations. On the market floor they give food presentations, and each week one product is given special attention. During the first week the ClemenGold was chosen as the product of the week. This product is promoted by Harrie Goesten, Van Aarle, Van Ravenswaaij and Willem Dijk wholesalers. In the photo above stands Angelique Goesten.

According to developer Schröder the target group for this hall is not only the upper class. "There is a mix of cheaper goods and comparatively more expensive goods. This way the market hall can be successful no matter what changes come in the future." 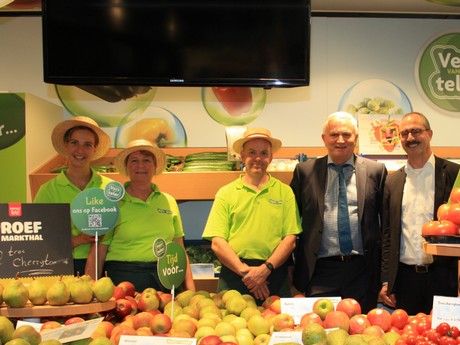 The 'Fresh from the grower' pavilion. André Paap, company leader of 'Vers van de teler' (Fresh from the grower) pavilion, was unfortunately busy when this photo was taken. In the photo is (among others) Peter van Osch, director of Veiling Zaltbommel and Hans Van Luijk from Van Nature. André placed the emphasis on cooperation in the new market hall. "Together with Coöperatieve veiling Zaltbommel (Zaltbommel cooperative) en Telersvereniging Van Nature (Nature Growers) we are going to promote Dutch products. It is important to us to bring Dutch products onto the Dutch market," he said earlier in an interview with AGF.nl

Would you like to know which entrepreneurs are in the market hall?
Then check it out at www.markthal.nl