Italy: cauliflower supply could see a gap for about ten days

Stefano Calevi, marketing manager of F.lli. Calevi A. & S., speaks about the current cauliflower season. The company, situated in Viterbo (Italy) and specialized in vegetables such as cauliflower, cabbage, broccoli and melons, joins the producers' organization ASPORT. 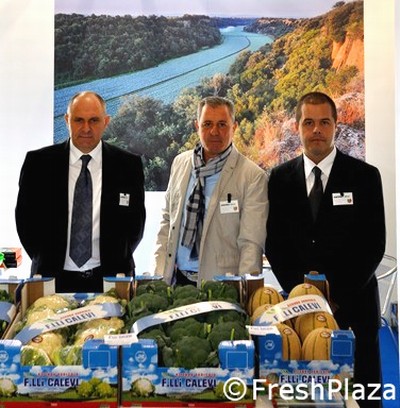 From left to right: Stefano and Alberto Calevi and the company agronomist Dino Amici.

Cauliflower cultivation occurs on 200 hectares (on rotation) in open fields, for an annual volume of 5 million kilos. Thanks to the alternation between Viterbo's area and the supply from Piana del Fucino (Abruzzo - Italy) during the summer period (25th July-5th September), the company F.lli. Calevi manages to work for the whole year in the cauliflower segment. "Only France is also present on the market for 12 months a year, thanks to its favourable climatic conditions.

On the total volume of produced cauliflower, 80% is white cauliflower, the rest (20%) is Romanesco cauliflower. "Our main market is Italy with a share of about 90% - Stefano explains - Exports abroad begin 15th December, when in northern Europe the production is over. We have seen a growing interest toward Romanesco cauliflower also from northern Italy and foreign countries such as Germany and Switzerland in recent years. Switzerland wants only small heads, weighing about 500 g."

As for supply, Stefano reveals that soon could be a gap. "Due to an increase in temperatures in the last days, part of produce has ripened early. The 90-day varieties cycle is finished, thus we expect a lack of cauliflower for about ten days. Also the cultivated areas in Southern Italian regions are recording the same situation. Meanwhile, abroad, Poland ended its production."

As for prices, Stefano says: "On wholesale markets we record 65-70 cents/kg, with an increase of 5-10 cents compared to last week. Retailers sell the product for 75-80 cents (without film) and 1 Euro (with film)."

The peak production is expected in January-February 2013.