Fighting fungi, bacteria and viruses with light? It’s possible, according to Ries Neuteboom of CleanLight. During last year’s Horti Fair the company demonstrated a fully automatic boom mount with UV lamps attached to it. The sprayer recently won them a prize. But how does it work?

“By treating crops daily with CleanLight (UV), all bacteria and fungi are killed,” says Neuteboom. “That saves money on pesticides: up to 50% according to our data. And of course UV leaves no residues.”

But isn’t UV treatment harmful to crops? No, says Neuteboom. “The crops are only lit 1 or 2 seconds a day. And the light only strengthens the plant.” 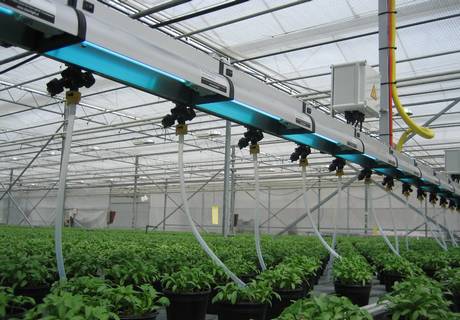 Applying CleanLight is easy. “CleanLight is meant as a pre-emptive measure. You use it to prevent infections. The units can be installed on existing greenhouse equipment, like sprayers and boom mounts. But they can also be used manually, as we see in Kenya, Ethiopia and Ecuador.”

This year’s show at Horti Fair promises another surprise. “Last year we introduced the fully automatic boom mount with UV lamps. But this year we really have a first! A robot with CleanLight. It moves autonomously across a cable!”