In 2011 the brothers Kaaij had made enquiries about extension of their area. However, not with the traditional glasshouse, but they were interested in the "semi closed climate system." On 2 April last agreement was reached between the Kaaij Group and Kubo to build the Ultra Clima glasshouse. Completion was planned for 1 October and now, a few days before time, we are proud to inform you that together we amply made the deadline! 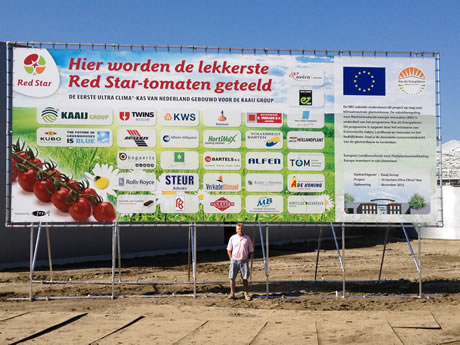 It is the third version of the original Ultra Clima glasshouse. The improvements, which were applied to the second version,are mainly about the technical aspects of the glasshouse, namely:
* The special diffuse glass of Clima has a special AR coating (anti reflex)
This means that less light reflects. Therefore more light enters the
glasshouse and goes deeper in the plant.
* More light because of leaving exhaust valves and and insect mesh on the
roof.
* Less problems with sickness and plagues, because of insect mesh no
insects in the glashouse.
* Optimum cultivation possibilities, because the control of air humidity
and temperature.
* A higher CO2 level in the glasshouse and less emission to outside.
* More air buffer in the glasshouse because of column height of 7,5 metre
which gives a better climate in the glasshouse.
* The growth light is new also; never before were lamps hung in the
Ultra Clima glasshouse. This supplies the nicest Red Star tomatoes
all year round.
Click here for photographic report
Not every thing went automatically. After the various disappointments, such as the weather (a lot of water problems), late delivery of materials, it was nevertheless nice to see how, because of the correct planning, the weekly discussions and all mutual cooperation with all parties, an example of craftmanship is being built in Dinteloord.
The Kaaij Group congratulates and thanks all, who together with Kaaij accepted the challenge and have realised the firm planning with support from Aris de Koning and Marco Broch! A special thank you to:
Wouter Kuiper of Kubo, who with his whole team made sure that the ideas of Kaaij were realised. The builders of Rozenburg together with those of Matthieu de Jong and Henry van der Lans for glazing and other companies have shown enormous effect. Thank you so much for that!
Ronald Verkade of Verkade Verwarming and his team, who have devised everything and Walo with Vita Lorente, who did all the welding and the ground pipes. Also Martin van de Berg thank you for reflect welding of all pipes.
Jan Vellekoop and PDI Peter Dekker Installaties and his team, who attended to the screen installation with the smallest parcel screen of 5 cm with insect mesh. Also our thanks to subcontractor Veldhoven, who manufactured the screen.
Holland Scherming, which manufactured the insect mesh for the exhaust valve
Dirk Verkade of Verkade Beton who supplied the concrete and the special concrete in the Ultra Clima room holding the ventalators.
Erik van Leent and Marco van Viane of Twinsbouw, who built the business and other areas.
Koen Brabander of PB Techniek and his team, who took care of theentire technical and water technical installations.
Martin Van Dool pf Hortilux and his team, which took care of the 1,000 Watt lighting fittings.
And above all the ministry of EL&I, the Rabobank and all other partners making this project possible.
This project has been made possible by the subsidy Marktintroductie energy-innovations (MEI) of the Ministry of Economic Affairs, Agriculture and Innovation in the frame work of the program Glasshouse as a source of energy on the road to climate neutral glasshouse horticulture in the Netherlands.
The European Agricultural Fund for the development of the countryside:
Europe invest in its countryside