In Chile the race is not only on to get tons of cherries to China in time for the earlier New Year, but also to breed and evaluate new early maturing cherry varieties that will make their season even earlier. These new earlier maturing cherries will also taste sweeter, have fewer chill requirements with the aim of reaching the Chinese market sooner and help to achieve better profits for Chilean producers.

Since the beginning of November, ANAChile, a variety and evaluation company in Chile, has held three interesting Field Days in three evaluation centres located in the cities of El Tambo, Huechún and Paine. The aim is to introduce producers and the industry to the “excellent quality of fruit that the early varieties of cherry trees are presenting, in areas with less cold build up. The varieties presented in this first part of the season were Nimba cv. and Pacific Red cv”, says Lorena Pinto, Product Manager and an evaluator at ANAChile. 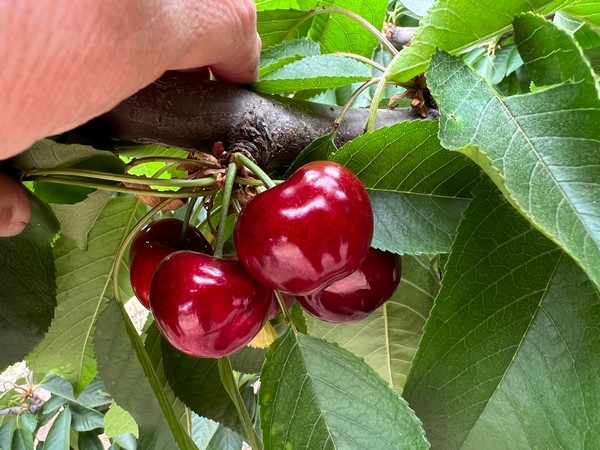 “These two varieties could make a significant difference for producers with respect to the returns they receive, since they are superior to those currently available for that harvest season. In general, the earlier a quality cherry can reach the destination markets – in this case, the Asian market and, in particular, China – the better the producer's profit should be. However, not only this aspect is relevant: the size and the level of sweetness play a great role in the evaluation of the quality of the consumers, and therefore in its final price. Due to the above, the varieties Nimba cv. and Pacific Red cv constitute an excellent alternative to compete with the traditional early varieties, with a fruit of better flavor and quality.”

Advantages in firmness, flavor and size
ANAChile reports in feedback at the filed days that the variety Nimba cv has a very good size and ripens as an extra early harvest fruit. These are all factors that are highly valued in the market. It would be harvested between the last week of October and the first days of November in the central zone in Chile, around 16 to 20 days before Santina. It has been verified that the plant of this variety is quite early in production; on the other hand, it has a high productivity, despite not being self-fertile. Its shape is 'kidney-shaped' and it has a mahogany red colour, dark red flesh and a large caliber (30-32mm) even with high loads. Despite the fact that in Spain its average firmness would not exceed 70 Durofel, its performance in Chile -considering fruit observed this season and the previous one (first fruit)-, has been significantly higher, reaching firmness values ​​that were in the range between 75 and 80 Durofel. Meanwhile, the variety Pacific Red cv., belonging to the same program as Nimba cv. (Californian origin), constitutes a variety of round fruit, mahogany red to dark red in color, high firmness (85 Durofel), good flavor and sweetness (18°brix), with medium-length pedicel and very good adherence. It is harvested about 3 to 4 days after Nimba cv. Last season the first fruit was observed in more representative volumes, reaching a high level of soluble solids (18-22°brix) and firmness between 80 and 85 Durofel. It is a self-fertile and very productive variety, according to the information at source, also recommended for Nimba pollination. In this sense, it should be considered that its juvenile period is somewhat greater than that of Nimba cv. and it will take longer time to enter full production,

Commercial Stage
Both Nimba and Pacific Red are in the commercial stage, based on a system of reservation of planting rights, with a royalty per plant and a royalty based on fruit production. The company says in the case of Pacific Red, there is still acreage available to reserve, while for Nimba cv. the initial area to reserve is exhausted. “Notwithstanding this, ANAChile is evaluating the opening of a new stage of reserves, according to the behavior at harvest and post-harvest observed this season.”