'Presence of Spanish Clemenules, Oronules and Orogros expanded once again'

As far as clementines went, Spanish batches obviously predominated: the presence of Clemenules, Oronules and Orogros again increased, which had a negative impact on the prices in some areas. In some places, the fruit was available in larger calibers than before. Italian and Moroccan lots were supplementary with very small quantities, according to BLE. Turkish imports predominated as far as satsumas went, which were now available in many different formats. Spanish deliveries were rather rare and could only be found in Hamburg and Berlin. 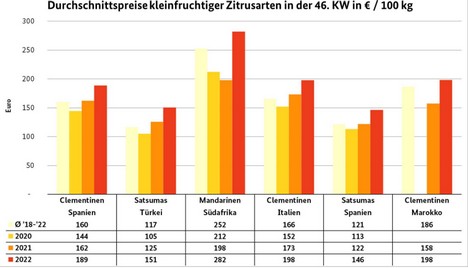 Regarding mandarins, there were mainly South African shipments, which still met with sufficient interest in Frankfurt. They played more of a secondary role in Cologne. Peruvian shipments had almost completely withdrawn from the scene. In general, demand was satisfied without any effort. Prices remained mostly constant. There were a number of returns from food retailers, which naturally slowed down the turnover of products. Lower prices improved accommodations in these cases.

Apples
Domestic offerings dominated the scene, which were complemented by French and Italian goods. The importance of Red Delicious, Pink Lady and Royal Gala from Italy expanded. French Pink Lady and Jazz also gained relevance. Imports from the Netherlands, Belgium and Poland rounded off the range with small volumes. Overall, demand intensified somewhat.

Pears
Abate Fetel, Williams Christ and Santa Maria from Italy and Santa Maria from Turkey formed the basis of the range. Domestic and Belgian Conference as well as German and Dutch Gute Luise came next in terms of importance. In a continuously quiet trade, prices remained mostly at last week’s levels.

Table grapes
There was movement in the commodity range, as the Turkish Crimson Seedless and Sultana decreased. Instead, Peruvian deliveries increased, with Sugraone and Autumn Crisp being unloaded as a priority. Volume-induced increases in the price of Italian products were achieved here and there, but not to any great extent overall.

Oranges
Somewhat more autumnal weather improved the sales possibilities in some areas. However, this did not necessarily affect prices, as availability also expanded. In particular, the presence of Spanish navelina expanded. From Italy, mostly untreated fruit flowed in.

Lemons
Spanish and Turkish shipments largely shared the market. In Frankfurt, there were Egyptian lots as well, which were offered at €23 to 24 per 15-kg carton. There, as in Munich, low-priced Greek as well as untreated Italian lots arrived.

Bananas
Supply and demand were sufficiently balanced. As a result, traders rarely had cause to adjust their previous prices. For the most part, consumer interest increased a little towards the weekend, but this did not always impact the on prices. In Cologne, second-tier brands from Costa Rica became a bit cheaper.

Cauliflower
First Italian and Spanish shipments joined the domestic and Belgian offers. Deliveries from Poland and France increased. Dutch products complemented the market. As the end of the season was approaching for domestic products, their prices moved upwards in some cases.

Lettuce
In the case of iceberg lettuces, Spanish deliveries now had a firm grip on the market. Products from Germany had a supplementary character at most and had long since ceased to arrive at all locations. Their quality was increasingly faltering. However, the Spanish offers covered the demand sufficiently. Lettuce came in from Belgium, Italy and Germany.

Cucumbers
Spanish cucumbers obviously dominated the market. Belgian and Dutch offerings complemented Greek ones. Moroccan imports turned up in Frankfurt, with 300s graded in 14s cartons. The majority of the prices trended upward.

Tomatoes
A variety of countries were involved in the action. However, the Netherlands and Belgium were dominant. Morocco and Turkey mainly sent round tomatoes, Italy mainly sent over cherry tomatoes, Croatia and Spain mostly truss tomatoes. In general, the quality was not always convincing. In some places, a wide price range was established for some varieties.

Sweet peppers
The season of Central European offerings was nearing its conclusion: Dutch, Belgian and domestic items increasingly disappeared from the range. This was led by Spanish batches, followed by Turkish and Polish. Moroccan imports did not advance beyond a supplementary status.