In January-October 2022, Uzbekistan imported almost 2 times more bananas compared to the same period last year. Moreover, the volume of banana imports in the period under review shows a two-fold increase for the second year in a row, EastFruit analysts say. 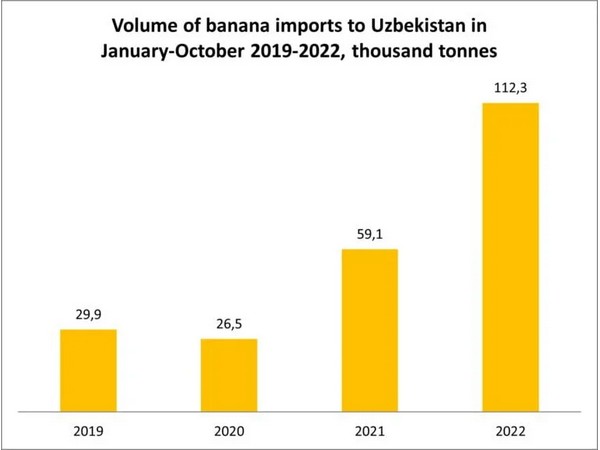 As the chart above shows, the volume of banana imports to Uzbekistan in January-October 2020 decreased by 11% compared to the same period in 2019. Before the COVID-19 pandemic, banana consumption in Uzbekistan grew rapidly, but the pandemic interrupted the growing trend. One of the factors behind this was false rumors that COVID-19 was transmitted from bananas shipped from China. Despite the absurdity of such rumors, they nevertheless had a negative impact on banana consumption in Uzbekistan.

However, according to statistics, the volume of banana consumption in Uzbekistan recovered in the subsequent years. What’s more, it is growing fast. As EastFruit experts have repeatedly noted, one of the main reasons is the expansion of supermarket chains, which have an essential impact on the banana trade in the country. Bananas are a very convenient product for supermarkets since they can be imported directly all year round and sold cheaper than at markets due to large volumes. Therefore, bananas are the most-sold fruit in the supermarkets of Uzbekistan. According to the results of an online survey by the Makro supermarket chain (Uzbekistan), every third buyer of this chain called bananas their favorite product, without which they do not leave the stores of the chain. Thus, as the number of supermarket chain stores in the country grows, banana consumption will increase.

An additional incentive for the growth of banana consumption in Uzbekistan is the decision of the country’s government to zero import customs duties on bananas. A zero-rate customs duty regime has been in effect in Uzbekistan for the import of bananas since October 2021. By the decision of the government of the country, the period of validity of customs privileges for the import of banana and citrus fruits was extended on November 17, 2022, for another six months.

The main supplier of bananas to Uzbekistan, as in previous years, is Ecuador. It accounts for 99.2% of the total banana imports in January-October 2022. The rest of the imported volume was supplied by Kazakhstan (426 tonnes), Turkey (197 tonnes), India (144 tonnes), and Kyrgyzstan (99 tonnes).