From this year, South Africa now finds itself in the second position as apple supplier to China which has increasingly been looking for apple imports. In first place is New Zealand.

The South African export campaign to China (99% comprising red apples with a smattering of Golden Delicious) is nearing its end, neatly encompassing the lucrative Mid-Autumn Festival.

The country has only been sending apples to China for eight years and the trade has been in a generally upward trend, growing by three-digit percentage points almost every year, surging by 291% from 2018 to 2019. Despite an anomalous 2020 when trade slipped back by 39%, South African apple exports to China have rebounded and 1,090,612 12.5kg cartons have been exported this year.

Market development around unique characteristics of South African Fujis
In the first year of sending Fuji, volumes were a mere toe in the water: 3,500 cartons, this past year it has surpassed 728,000 cartons, composing the bulk of South African apples going to China. 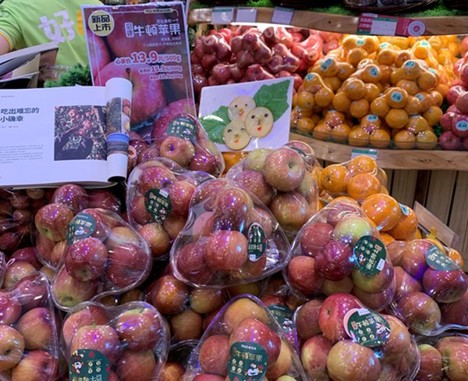 South African Fuji apples on display at a Pagoda store

“South African Fujis look different to, say, Chinese Fujis in terms of colour and size,” notes Jacques du Preez, general manager for trade and markets at Hortgro, the deciduous fruit umbrella body. “Traditionally China was regarded as a market for large apples but we have been developing a market for small apples.”

A result of the programme to find an outlet for smaller apples is Pagoda’s Newton apples, but other outlets are also offering smaller apples for which, it was initially thought, there’d be no pull.

Royal Gala apples are closing in on three hundred thousand cartons sent to China and in its third year of Chinese trade, volumes of the South African Gala mutation Bigbucks jumped almost fortyfold, and this cultivar is in third place (64,000 cartons sent this year).

“Currently Bigbucks makes up 6% of the volumes we send to China but we do expect that it will grow,” Jacques says. 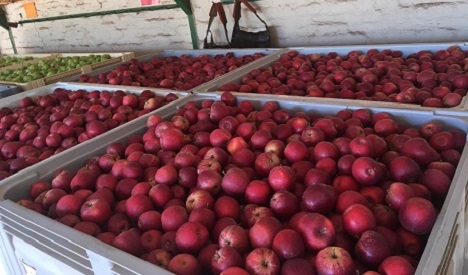 South Africa has also been diversifying its receivers to tier 2 cities as it has been developing the market. “We’ve been investing a fair bit in market development programmes through for instance promotional campaigns at retail level, but also in wholesale markets.” 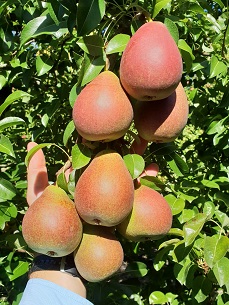 Jacques remarks that the past season has been “simply crazy, the busiest, most challenging year in the twenty years I’ve been in the industry.”

Market conditions in Europe for South African apples and pears were not what the industry had hoped for, despite lower domestic stocks, and hence sales and returns were disappointing.

Jacques notes that the sales tempo was just not there for all Southern Hemisphere apple and pear suppliers to Europe.

Happily, South African pears are now also allowed into China and the first have arrived to a good reception.