Four years after its launch in 2018 at Fruit Attraction, Blue Whale has chosen to honor once again the Candine apple for this 2022 edition. Here's a look back at this "sweet nugget" that in the space of four years has already seduced 14 countries. 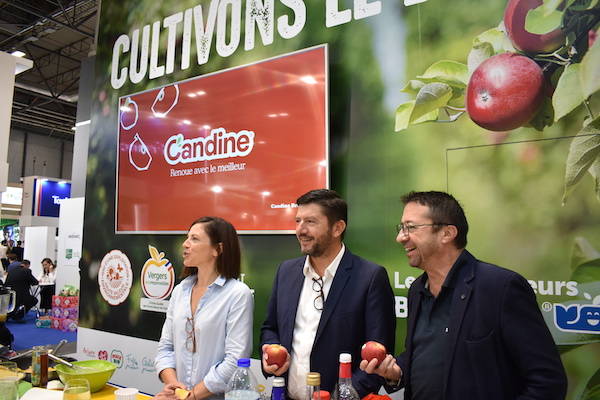 Christelle Bertin, Christophe Belloc, and Marc Peyres during the presentation of Candine on the Blue Whale stand at Fruit Attraction

This cross between Fuji and Ariane aims to "rejuvenate the apple aisles, which are made up of 50% elderly consumers". Indeed, younger consumers tend to turn away from traditional apple varieties. "There is a kind of stagnation in the apple market in terms of average consumption," says Marc Peyres, the Group's sales director. However, the gustatory potential of Candine was clearly identified by Blue Whale as an "opportunity to recruit and seduce people under 35, who today opt for healthy, fun and fruity snacks," says Christelle Bertin, Blue Whale's communications and marketing director. This is a fast-growing segment, with 25% growth over the last three years in Europe.

In addition to its organoleptic qualities, which make it "one of the sweetest apples on the market, with beautiful aromas of exotic fruits", it can be grown organically, being naturally resistant to scab. Its firmness and its good storage qualities allow it to travel and conquer the export market while keeping its freshness: "It is its resistance to travel that allowed us to project ourselves on more distant markets. Today, it would be possible for us to sell the entire harvest in Asia, where it is particularly appreciated. But we have chosen to keep a part of it for the French and European markets, in order to make it known and prepare for the future. This year, the apple is particularly sweet. Everyone was worried about the season. In the end, we have an excellent season ahead of us," says Marc Peyres.

To win over the hearts of young French and European consumers, Blue Whale has decided to spare no expense, since 15 to 20% of the variety's turnover will be dedicated to its promotion. Setting up tasting events, developing digital distribution in stores, creating a new positioning and visual universe with an impact around the slogan "With Candine, reconnect with the best", nothing has been left to chance to enable Candine to rejuvenate the apple shelves!

Today, there are 230 hectares of Candine apple orchards. If 1,000 tons were harvested for the previous campaign, 3,500 tons are expected this year. A potential that could reach 8,000 tons for the next season.