Local products prevailed: Elstar, Delbarestivale and Jonagold were very much available. From Italy Royal Gala and Golden Delicious were the main arrivals. French, Dutch and Belgian lots only had a selective and complementary character. Poland and Spain participated only with minimal volumes. The demand could be satisfied without any problems. It was a little slow here and there. 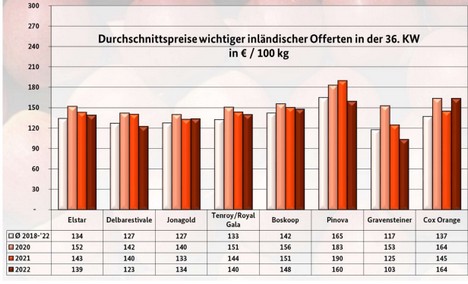 As a result of extended availability, prices often moved downward. Formerly dominant alternative goods disappeared more and more from the assortment and at most had a complementary status. The presence of imports from overseas also dropped off: New Zealand Braeburn and Jazz as well as Chilean Pink Lady and Kanzi only met with limited interest. To achieve clearance, traders often had to lower their previous prices.

Pears
There was movement in the range: New additions were Dutch Gute Luise. The relevance of Italian Santa Maria and Williams Christ increased. The importance of Turkish Santa Maria and German Gute Luise also increased. Conference now came from domestic growers, the Netherlands and Belgium.

Table grapes
Shipments from Italy grew rapidly: Italia, Michele Palieri and Victoria in particular gained in importance. Turkish Sultana and Crimson Seedless also saw a great supply. On several occasions, demand could not keep pace with the extended supply situation. In these cases, distributors had to lower their prices as a matter of course.

Peaches and nectarines
The campaign was nearing its conclusion: the availability of Italian, Spanish, French, Turkish and Greek offers dropped noticeably. Some production regions had already disappeared from the market. The quality also left something to be desired, with an increasing number of problems being recorded.

Plums
Local offerings dominated the market: Presenta, Top, Cacaks Fruchtbare and Fellenberg formed the basis of the range. Auerbacher, Hanita and Elena had lost some of their importance. Stanley was shipped in from several Eastern European countries, and Italy participated in the sales in Frankfurt with their President. Overall, availability had again expanded.

Lemons
South African and Argentine imports predominated. Spanish fruit was rare and not present in all markets. Imports from Uruguay were only available in Hamburg. South African products became cheaper in some places due to volume factors. In Cologne, Argentinean shipments became slightly more expensive.

Bananas
In most cases, supply was in harmony with the demand, so traders rarely needed to adjust their prices. When they did, they usually raised them. However, there was no clear trend: sometimes primary brands became more expensive, sometimes there was more demand for secondary and tertiary brands.

Cauliflower
Domestic goods dominated the scene, with Polish, Belgian and Dutch goods supplementing. Demand was quite good, but could be satisfied without any problems. In Frankfurt, the Dutch products were very appealing in terms of quality, but at €15 per 6-pack they were also quite expensive.

Lettuce
In the case of lettuce, it was possible to access both domestic and Belgian lots. The qualitatively superior imports were more expensive than the competition: Between €13 and 17 was paid in Frankfurt, and up to €18 in Berlin, for a 12-piece box. They only became cheaper towards the weekend. The availability of iceberg lettuce expanded, but prices still trended upward.

Cucumbers
The first Spanish batches of cucumbers arrived selectively. This had a direct impact on the prices of the dominant domestic and the complementary Dutch and Belgian offers. Their prices dropped slightly. In Berlin, promotional retail campaigns led to a shortage of volumes in the market square, which caused prices to rise.

Tomatoes
As usual at this time of the season, Dutch and Belgian deliveries dominated the scene. The range  was supplemented by tomatoes from Poland and cherry tomatoes from Italy and Spain. The demand was quite nice.

Sweet peppers
Availability grew. Deliveries from the Netherlands, Turkey and Poland increased. Belgian batches supplemented the scene, domestic goods were of more interest to specialty retailers in Frankfurt. The presence of Spanish items grew, which inevitably affected the prices.