Growers and shippers were on watch on Friday following reports that Tropical Storm Kay had made landfall in Mexico. Categorized as a Category 1 storm, it reportedly hit along the West Coast of the central Baja California peninsula starting Thursday afternoon.

In turn, this had raised concerns over the potential of flooding there as well as in other parts of California, parts of which have undergone a heat wave with temperatures above 100 degrees F. for multiple days, but also Arizona, particularly Southwest Arizona.

“It is raining in northern Baja California as the remnants of tropical storm Kay head west into the Pacific Ocean,” said Mark McBride of Coastline Family Farms on Friday. “The rain started early today in the Mexicali area and is forecast to continue through today with some lingering showers on Saturday.”

So what does that mean for growing areas in the region? “The current regional green onion harvest will be delayed as a result of the wet conditions and there is the potential for crop damage if heavy downpours impact fields,” said McBride. “Rain is also forecast for the Yuma and Imperial Valley regions just as both areas are planting for the front end of the desert vegetable deal.” 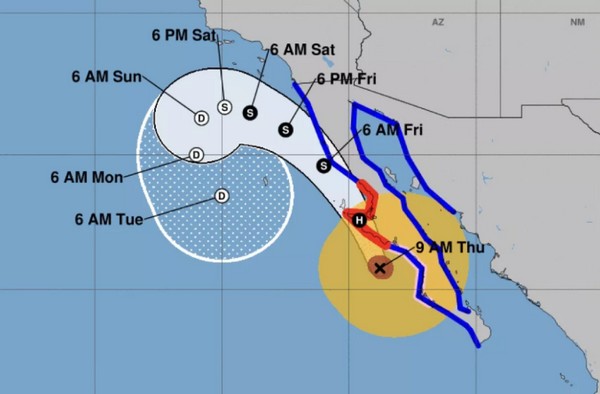 Wait and see
While he notes that the rain may either disrupt or delay the early desert plantings, it won’t be able to assess the storm’s impact until it sees exactly how much rain is received in all areas.

In berries, the storm disrupted raspberry production in Baja California and the strong winds did damage some of the tunnels. “But the growers see the heavy rains as beneficial. The rain was needed, and has helped replenish aquifers which alleviate the effects of extended drought,” says Janice Honigberg, president of Sun Belle Inc.

At the same time, she notes that an unrelated storm coming from the Pacific to Michoacán caused rivers to overflow and put some berry fields underwater on Friday. “This has followed weeks of rain,” says Honigberg. “Unfortunately there is a new system off the coast. We will see continued rain in Central and Western Mexico this week which will affect the quantity and quality of exportable raspberries and blackberries for now.”