Mississippi sweet potato growers and shippers are somewhat relieved with the 2022 crop following the summer drought that made headlines across the country. “We had high temperatures and the no water situation was very depressing. However we seem to have made it through and it will not be a crop failure which is what could have happened and did happen to some other crops,” says Sylvia Clark of the Mississippi Sweet Potato Council.

Mississippi saw five to six weeks of drought conditions throughout June and into early July. “However right now our farmers are starting to dig and their reaction is that they are pleased with the turnout,” says Clark. “It’s maybe considered an average crop but it’s a better outcome than they were thinking it was going to be. We’re hoping for at least as good a crop as last year but it’s too early to tell.”

Clark notes that the state’s sweet potato growers tend to rely on rain to water crops--very few farmers have irrigation. Rain did finally hit the region mid to late July and then August saw adequate rains again. “So harvest is about two weeks later than normal. Sometimes people start in the middle of August but they’re just starting now. The delay is partly because we got rain right when people were ready to start digging so they had to delay it,” she says. Harvest will go until the middle to end of November. 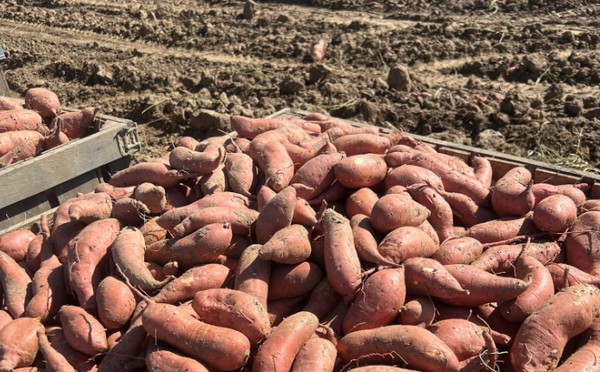 Little to no acreage change
Generally, the state’s sweet potato acreage is similar to 2021’s. Mississippi had planned on more acreage for this year but some fields were lost to the drought and the climate event also prevented growers from planting more.

As for sizing, it’s as expected. “Every year you try to avoid having jumbos and no matter what the weather is, you always have jumbos. Maybe not as many this year but I have heard there are some jumbos,” says Clark.

Even with demand anticipated to be steady, and possibly increased in parts of the country, pricing is likely similar to 2021. “We hope for it to be up and certainly this year after all the increased pricing on inputs,” says Clark. “But we are demand-driven so I don’t think it will be up a lot, if at all.”