Lake Constance fruit growers expect an above-average, quality apple harvest of 258,000 tons this year. The Baden-Württemberg State Secretary of the Ministry of Food, Rural Areas and Consumer Protection Sabine Kurtz officially opened this year's apple season, together with the fruit growers in Kressbronn on Lake Constance on September 6, 2022.

The apple harvest at Lake Constance is already in full swing. Due to this year's early ripening, the great apples from Lake Constance have already been harvested and sold since about mid-August. "Weather-wise, we had a good year. You can see that in the beautiful, large and tasty apples," Erich Röhrenbach, who together with Thomas Heilig is chairman of the Obstregion Bodensee e.V., said happily at the official opening of the 2022/2023 Lake Constance apple season in the Seegarten in Kressbronn. 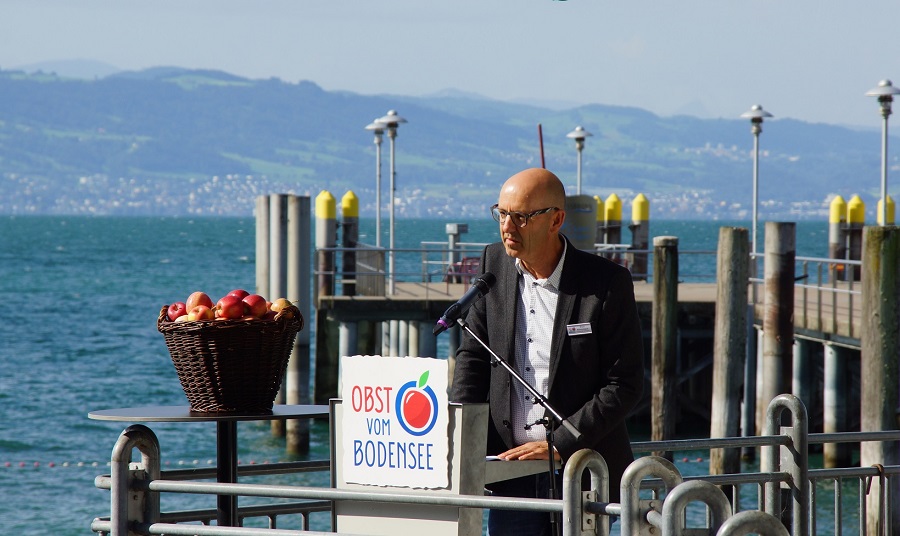 Erich Röhrenbach, chairman of the Obstregion Bodensee e.V., welcomed the guests on the shores of Lake Constance.

Good growth and early start of harvest
The warm spring this year led to an early blossoming and so the harvest of the Lake Constance apples this year is also about 10-12 days earlier than last year. The orchards were mostly spared from late frosts and storms this year, and there was also rain at Lake Constance despite longer dry periods, fortunately. Overall, therefore, the fruits were able to develop very well and there are now beautiful large fruits hanging on the trees for harvest. The quality of the fruit is also good. Due to the many hours of sunshine, the fruits developed a high sugar content, a very good sugar-acid ratio and an excellent taste.

Above-average yield with large, quality apples
The estimated harvest volume for 2022 at Lake Constance is 258,000 tons, says Jürgen Nüssle, managing director of the Württembergische Obstgenossenschaft Raiffeisen eG at the 2022 Lake Constance apple season opening in Kressbronn. This corresponds to an increase of around 14% compared to the quantity actually harvested in the previous year (228,000 tons) and is also above the long-term average. 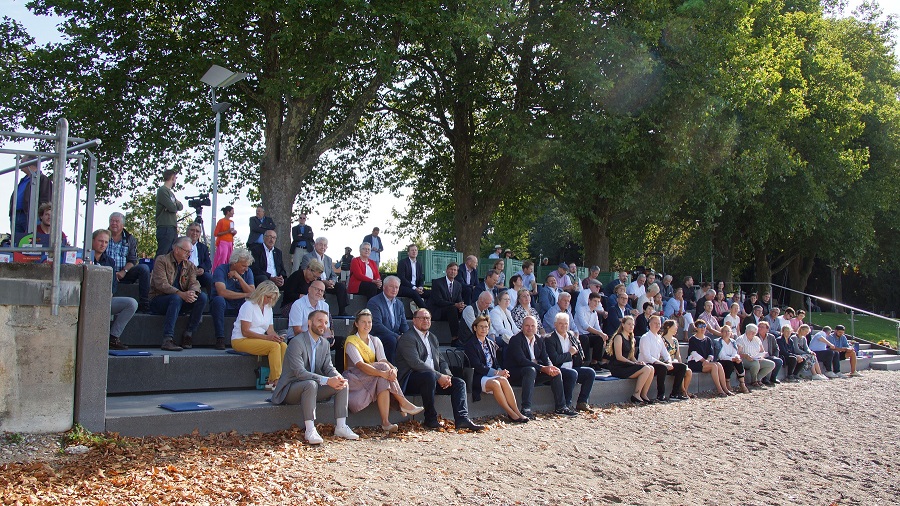 With a direct view of Lake Constance, the almost 100 guests present followed the event in the Seegarten Kressbronn on Lake Constance.

A harvest of 1,067,000 tons is expected throughout Germany. Across Europe, experts are predicting 12.2 million tons. Both in the EU and in Germany, this is thus the largest harvest volume since the record year of 2018. In Germany, the main varieties Elstar, Jonagoldgruppe, Braeburn and Gala account for almost 70% of the total harvest.

At Lake Constance, Jonagoldgruppe, Elstar and Gala have the largest variety share and account for around 60%. Compared to other regions, Lake Constance also already has a fairly large share of newer club varieties, such as Fräulein, Kanzi or Evelina, at 12%. "This makes it very clear what a diverse and modern range is grown at Lake Constance," Jürgen Nüssle clarifies. 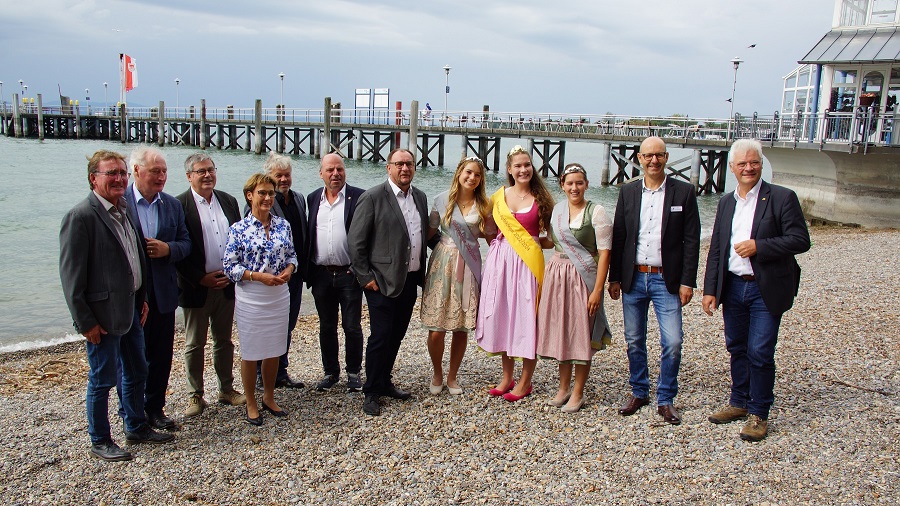 Concern about general conditions for fruit growing
This year, on the other hand, fruit growers are particularly concerned about the economic conditions for fruit production in Germany. Production costs are rising considerably due to increases in the cost of inputs, wages and transport, as well as increasing political requirements.

At the same time, fruit growers are competing with other fruit producers inside and outside the EU, some of whom produce at significantly lower standards and costs and can thus offer fruit at lower prices. Changes in the sales market due to the war in Ukraine also have an impact on the German market. Apples from other EU countries, such as Poland, are no longer exported to Russia and put pressure on the German market. Last but not least, consumers are reluctant to buy regional apples due to the increased prices, which in turn has a negative impact on volume sales and selling prices.

There is great uncertainty as to whether the sharply increased production costs can be covered, despite the good harvest and the very good qualities. In order to ensure economic production and thus the existence of the farms, higher payout prices must be achieved for the producers.

In this context, the chairman of the fruit region Lake Constance appeals to all participants in the value chain, from trade to gastronomy to consumers, to consistently rely on regional fruit at fair producer prices and thus to give the fruit-growing families with their farms a perspective for the future. In order to make this possible and to make the origin of the fruit used in processed products, such as apple juice or apple puree, transparent, the fruit growers are also calling for mandatory origin labeling for processed products.

Fruit growers committed to sustainable further developments
For just under a year, Obstregion Bodensee e.V. has been working on a sustainability project funded by the MLR, reports Erich Röhrenbach. This project, worked on by the fruit growers themselves, takes up the demands of our society and tries to develop possibilities for a sustainable further development of fruit growing. In the short time since the project began, two model plants have already been created on practical farms in the region, which are now available for practical trials. In addition to variety testing, studies on biodiversity promotion and trials on ways to reduce pesticides, the fruit growers are also looking at CO2 balances in apple production, land requirements and social standards. An important component when looking at the sustainability of fruit growing at the lake is also the marketing of regional products and the associated economic situation of fruit production. 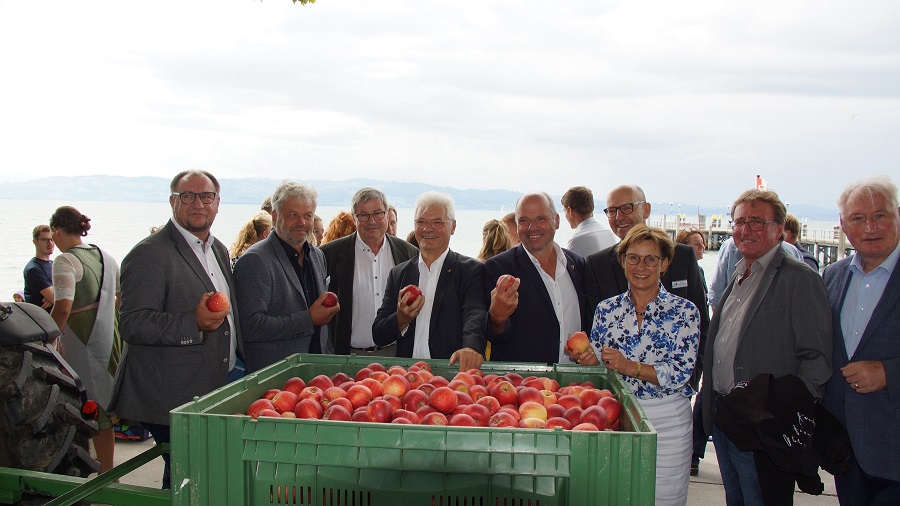 State Secretary Kurtz (MLR) opens the 2022 apple season
Together with fruit growers, Sabine Kurtz, the Baden-Württemberg State Secretary in the Ministry of Food, Rural Areas and Consumer Protection, opened the 2022 Lake Constance apple season. Together with representatives from politics and the fruit industry, you look at the year, the upcoming harvest and the marketing situation at a press and networking event. This year also saw the crowning of the new Lake Constance Apple Queens.

Now, it is harvest time and fresh apples from Lake Constance are available. By buying fruit from the region, everyone can contribute to the promotion of regional and sustainable fruit production at Lake Constance and support local farmers.