As California enters the beginning of its local tomato season which starts at the end of the month, organic Heirloom tomatoes are currently seeing a flush in production. “It will probably last from seven to 10 days. We have several growers out of several different growing areas so that means there’s a good supply of product,” says Ethan Abendroth, senior buyer for Earl’s Organic Produce. That said, the ample supplies are short term and by the weekend, supplies could be thinner again. “There’s a natural ebb and flow of the crop and we’ll flush again in another three to four weeks.”

For California’s local tomato season, organic Heirloom production is coming out of Chico, Salinas/Watsonville, Lompoc and Esparto. The season runs generally through November and when the first frost hits, product begins arriving from Mexico. “Mexico has done a huge job in closing the gap so heirloom tomatoes are now 12 months out of the year. The last of the last local production will be in the last week of November,” says Abendroth. 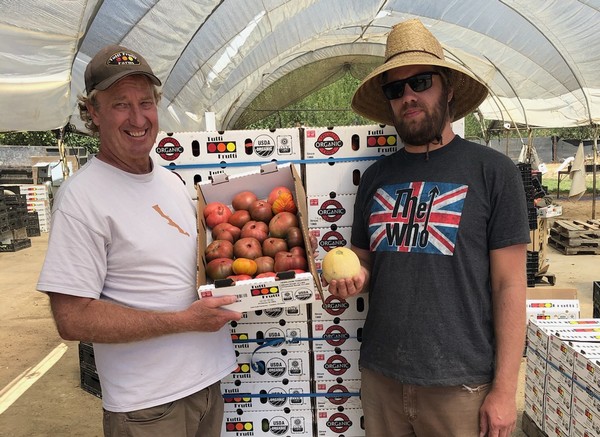 5th generation farmer Chris Cadwell started Tutti Frutti Farms (one of Earl’s Organic’s growers) in 1988 and now his son Orin and daughters Olive and Clara also work on the farm. All three can remember the introduction of the “big weird dinosaur tomatoes” to Tutti Frutti in the early 90s that became the heirloom tomato craze that now dominates their summers, aka “busy season.

Uneven movement
Meanwhile, movement of organic Heirlooms this year looks different than it did in 2021 which could be attributed to the fact that more people can/are taking vacations this year, inflation and how that’s affecting consumer food choices. “I’ve seen a space with a lot of tomatoes but also a space where a lot of tomatoes go through rather easily. Right now they’re not moving as smoothly throughout the system,” says Abendroth. “But with school back in session, people are spending more time around their home zip code and that should bring more velocity to the marketplace.”

Along with inconsistent movement this year, Heirloom tomato growers--like growers of virtually all commodities--are facing significant cost increases this year. “I’m not seeing any radical shifts in organic Heirloom pricing. In the flushes, the price goes down and in scarcity, the price goes up,” he says. “However more people are willing to go to the lowest price possible quicker and that has a lot to do with the amount of organic boxes being purchased. It’s a shrinking marketplace.”