A twenty to thirty percent higher picking performance in blueberries. According to supplier Vlamings, this can be achieved by using the new PickPick harvesting glove. The tool is particularly suitable for companies that perform a post-sorting, according to NFO. 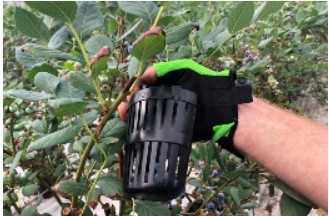 The PickPick, a Spanish made product, is a flexible glove with a black basket sewn onto it. "When the picker picks the berries with his thumb and fingers, they fall into the basket. This way, he or she does not have to turn around after every handful has been picked in order to put the berries into the boxes or crates. Only when the basket - which can hold approximately 200 grams of berries - is full does the picker empty it into the box or crate," explains Jelle Gerstel of Vlamings. This company is a PickPick dealer in the Netherlands, Germany, Belgium, Scandinavia and Estonia, Latvia and Lithuania.

According to Gerstel, the picking glove is particularly suitable for harvesting blueberries. "Blackberries and raspberries are too vulnerable for this method; after all, a full basket is shaken around in a box or crate. And since redcurrants are picked in bunches, this product is also less suitable for use with the PickPick."

Vlamings signals a lot of interest among blueberry growers for the harvest glove, which has been available since the end of June. "A large group of growers is now working with the PickPick. We see that the picking performance of blueberries is significantly improved as a result. On average, an employee can pick 20 to 30 percent more berries per hour, as tests show. After all, they don't have to turn around as often."

One point of attention, according to Gerstel, is that pickers usually have to get used to working with the gloves, which cost 23.50 Euro excluding VAT for a pair. "In addition, the PickPick is especially suitable for companies that also do post-sorting. Because the berries are picked from the bush, the selection is somewhat less accurate."