NZ looks at supporting RSE employers and workers in winter

By late May 2022, as the peak harvest period for New Zealand apples and kiwifruit came to an end, and winter pruning of kiwifruit and grape vines started, some 12,000 workers were available under the Recognised Seasonal Employer (RSE) scheme. This is almost double the number usually found at this time during a ‘normal’ year of RSE recruitment.

Of these 12,200, more than 2,300 were ‘long-term’ RSE workers who entered New Zealand in late 2019 or early 2020, pre-COVID, and who have spent well over two years in the country undertaking horticultural seasonal work, without returning home. Alongside the long-term workers were more recent RSE arrivals, including almost 1,700 workers who entered under two border exceptions granted by the New Zealand government in 2021, and just over 8,200 workers who arrived under the subsequent one-way quarantine-free travel arrangement from October last year. 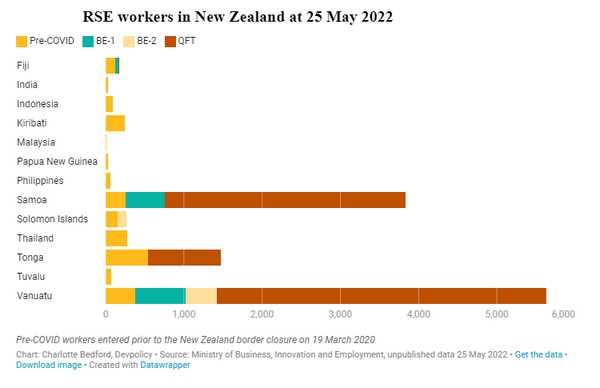 The winter months (June–September) are the low season for the RSE scheme, with demand for around 6,000–7,000 workers for winter pruning work. Usually, sizeable numbers of RSE workers who are employed for the peak summer harvest period return home to their families in late May and early June, taking up to a five-month break, before potentially returning to New Zealand for another seven-month period of seasonal work.