Australia is the second largest almond exporter in the world

The production of nuts in Australia has grown steadily in recent years and the prospects are that it will continue to do so for a number of years. Almonds are by far the most important nuts grown in Australia in terms of amounts and value, followed by the native macadamia and walnuts. The almond production in 2020/21 will once again reach a record 120,000 tonnes. A record harvest is also expected for macadamias and walnuts of 50,000 tonnes and 13,800 tonnes respectively in 2020/21. 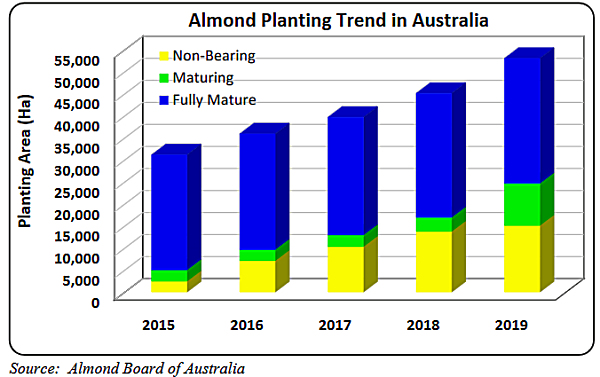 Almonds were first introduced to Australia in 1836 with the first plantings on Kangaroo Island and subsequent commercial plantings in the Adelaide Plains around the city of Adelaide in the early 1900s. Almond cultivation then spread along the Murray River in the region Riverland (South Australia) in the 1960s and then in the Sunraysia region (Victoria) in the 1970s.

However, the almond sector has only grown significantly since 2000. At the time, the planted area was only 3,546 hectares (ha) and over the past two decades it has increased by a massive 1,400% to 53,014 ha. Most of the expansion was driven by large business investment in the sector. In the last decade, the Riverina region of New South Wales has also become an important almond area. These three regions now produce 97% of Australia's almonds, and the country is now the second largest almond producer in the world.