The garlic market is virtually empty. Stocks are very limited and the little that comes in is quickly sold out. In South Africa this is currently resulting in very high prices on the domestic market. Other countries are taking advantage of the situation, including Egypt, which is seeing its exports increase very strongly. We are now waiting for the new harvest from China and Spain. The garlic is looking good in the fields, but the question is whether there will be enough workers to harvest it. 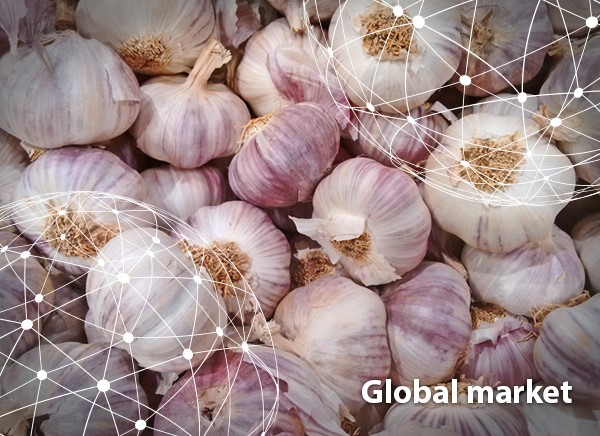 In Spain, there is a shortage of workers and there are pretty much no stocks left; a situation that also affects the Chinese harvest. The question now, before the new harvest arrives in Spain and China, is whether there are still enough workers available for the handling and packaging of garlic. In the fields, the crop is doing well, but that does not guarantee an end to the market shortages.

Germany: Market characterized by shortages
Due to the lockdown, there has temporarily been little supply from China. In Spain too, the available volume is barely sufficient, although German importers are busily looking for alternative suppliers. There is therefore scarcity across the board. Since a new harvest will soon be arriving from the main Spanish growing areas, stocks are now being used up as much as possible. The demand from the retail has been rising constantly over the last four weeks and there are concerns about whether and how this demand will be met in the long term. "Orders have doubled and even tripled compared to a normal situation. Garlic is apparently still perceived as a healthy product that strengthens the immune system. This market situation is logically having an impact on prices, which have been skyrocketing in recent weeks."

France: Market is almost empty due to high demand
Garlic has been one of the products with the fastest-growing demand during the crisis. The French market is almost empty and the same applies to neighboring Spain. Given the big demand, the question is whether there will be enough until the next harvest in Spain. This year, the harvest should hit the market earlier than usual. In south east France, fresh garlic is already available on the market, but the volumes are still small. The first dried purple garlic should hit the market around mid-July, followed by white and pink garlic. There are no problems in the field this season.

Spain: Growers are concerned about labor shortages
The price for Spanish garlic has risen by 15% since January. The demand is high due to global market shortages. The new season's harvest will start in early May in Andalusia. Although the floods have not caused any damage here, the growers are keeping a close eye on the quality. The acreage in Spain remains stable, with 27,000 hectares. Between the end of May and the end of June, the harvest will kick off in the country's main producing region: Castile-La Mancha.

The main concern for the growers is the shortage of pickers for the coming season. Due to the measures taken against the coronavirus, the borders remain closed and migrant workers cannot travel to Spain. The garlic harvest is very labor intensive. The Spanish government is trying to cover those jobs with the temporarily unemployed, but it takes time to train these inexperienced employees in picking garlic. According to the sector, the best solution is the German model, with temporary work contracts for migrant laborers working in the agricultural and horticultural sector.

Italy: Higher prices are welcome for garlic growers
Italian garlic prices are on the rise, with peaks of up to 30%. But this is only a recovery, as prices have been very low in the past two years and growers have barely been able to cover their production costs. The head of a large cooperative producing garlic in northern Italy said that the domestic product is now in high demand. Supermarkets require packaged and certified garlic and prefer the domestic product to the foreign one. The price increases in recent months have nothing to do with the coronavirus effect.

A trader from northern Italy says that Egypt, which has always been relatively less attractive for imports, has now become interesting, with much higher prices than in previous years. "We will start selling Egyptian garlic over the weekend. Italy will start the new harvest at the end of June, so there are still about two months to go. The acreage is comparable to last year's; however, producers are concerned about the lack of laborers." The market for organic products is more stable. "The production there is reserved for specialized customers and here too the price has risen considerably."

In central Italy, a large producer has expanded the acreage from 40 to 55 hectares, since the demand keeps increasing. He currently has no production available. Prices have been satisfactory.

Egypt: Taking advantage of market shortages
The garlic volumes available this season are comparable to last year's. The fresh garlic season has just come to an end and the switch to dried garlic has already been made. The demand is high at the moment, giving Egypt new opportunities to enter new markets. For example, exports to Brazil (this market opened to Egypt last year) have risen again. The demand for Egyptian garlic has also risen in Canada, the US and South Africa.

South Africa: Very high garlic prices
At the moment, the garlic in South Africa comes from Spain and China. Reportedly, there have been some disruptions in the logistics and there is a consistently low supply on the market. The price amounts to around 91 ZAR (€ 4.43) per kilo and is therefore very high (over 233% higher than in the same period last year). This is not only due to the market situation, but also to the exchange rate and a weak currency. More than 60% of the garlic is imported. Local growers have been planting garlic; however, a number of them have stopped because they were unable to compete against imports. Some retailers say that they prefer the in-season domestic product.

Peru: Market benefited from high import tariffs on Chinese products
Garlic cultivation takes place mainly in southern Peru and is intended for Mexico, Brazil, the US and Australia. The campaign runs from September to January, with some smaller volumes from July. In the latest season, the sizes have been smaller than usual. More exports have gone to the US thanks to the high import tariffs on Chinese garlic, and subsequently to the product shortages. However, the US mainly demands white garlic, while Peru mostly grows colored varieties.

Chile: Exports to Brazil have grown
The harvest started in November, with the peak between January and March. The main variety is the Chinese purple garlic and the biggest export destinations are Mexico and Brazil. Prices are better than last year. Back then, prices were poor due to competition from China. Brazil is buying more Chilean garlic, as anti-dumping measures have made Chinese garlic more expensive.

Mexico: Hardly any stocks left due to increased demand
The Mexican season runs from March to the end of July with a lot of cultivation of Chinese purple garlic and white garlic here and there. Demand is currently higher than usual due to a shortage of imports from China. Due to this high demand, there is almost no stock available and we have to wait for the next harvest phase at the end of May.

China: Price drop is expected in the coming weeks
The garlic market is very unpredictable this year. There is still plenty in stock and the new harvest is also arriving in May with larger volumes than last year. Normally, the price would have already fallen, but the price has remained high over the last few weeks. After the Chinese New Year, there was a great demand for garlic, but it was not possible to meet it immediately because of staff shortages or logistical issues. The price thus remained high, despite the large stocks.

The problems in China were quickly resolved and all companies were able to produce and export again; however, due to the further spread of the coronavirus worldwide, importing countries are now struggling with their logistics and this sometimes causes delays. Chinese companies are now also extra careful and are making clear agreements before exporting. The price is expected to fall in the coming weeks, but it remains unclear when that is going to happen. The price will drop anyway, because when the new garlic hits the market, the old garlic will automatically lose part of its value and the price for it will fall.

North America: High prices due to dried up stocks
Garlic stocks are also limited on the North American market. The shutdown of imports from China, which accounts for 80% of the world's garlic trade, had an impact on the market in Canada and the US. Due to the loss of this import channel, the importers focused on Argentina and Spain, as well as closer to home, on California and Mexico. These stocks soon dried up due to the sharp increase in the demand, so now it is time to wait for the new harvest from Spain, Mexico and China, which will arrive in May. Some of the supplies currently come from California, where smaller sizes are now also being sold. On the continent, prices have even tripled in some cases. Prices are expected to go back to normal around June. The garlic harvest in California is now entirely devoted to the retail, given that the foodservice was closed down in the first week of the measures. The demand from this sector is now back at 15-20% of what it normally is.